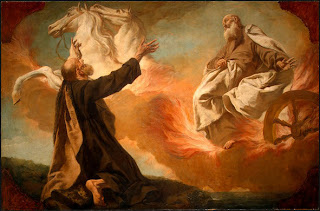 Elijah is my favorite Old Testament character. He a bold and fiery prophet who impacted an entire nation in one of its most challenging times. He raised the dead and never died himself. He called down fire from heaven and went up to heaven in a chariot of fire. He is one of two Old Testament figures that appears in the New Testament (at the Transfiguration). He is also prophetically connected with both the first and second coming of the Messiah.
In Matthew 17:10-12 we read that the disciples came to Jesus with a question about his Messiah-ship. They said:
“10…why then say the scribes that Elias must first come? 11 And Jesus answered and said unto them, Elias truly shall first come, and restore all things. 12 But I say unto you, That Elias is come already, and they knew him not, but have done unto him whatsoever they listed. Likewise shall also the Son of man suffer of them. 13 Then the disciples understood that he spake unto them of John the Baptist”
The disciples were confused because the scribes were attempting to prove that Jesus was not the Messiah by referencing an Old Testament prophecy by Malachi:
Malachi 4:5 “Behold, I will send you Elijah the prophet before the coming of the great and dreadful day of the LORD: 6 And he shall turn the heart of the fathers to the children, and the heart of the children to their fathers, lest I come and smite the earth with a curse.”
The scribes said, “If Jesus is the Messiah, than where is Elijah who was promised to precede him?” Jesus helped the disciples by explaining that “Elijah” had indeed already come in the person of John the Baptist. Yet it is clear that He was speaking not of a reincarnation of the old prophet, but the spirit and power of Elijah (Luke 1:17).
But what I find so fascinating about the answer of Jesus is that with the same breath He said “Elijah has come” (that was John), but also…ELIJAH WILL COME! (v.11)
John the Baptist came in the Spirit and power of Elijah to prepare the way for the first coming of the Lord. But Jesus promised that there is an “Elijah” yet to come before His second return. Who do you think that is?
Some people have said he will be one of the two witnesses that are killed in Jerusalem during the tribulation, but I don’t think that is a very good explanation. Look at what is promised – this “Elijah” which is to come, will “restore ALL THINGS.” Surely we don’t see this fulfilled by the two witnesses of Revelation 11.
I believe it can only be referring to one thing. In these last days, I believe that the same spirit and power that rested upon Elijah and John the Baptist will rest upon an entire generation. I believe that WE ARE THE ELIJAH GENERATION. It is we who will “prepare the way” for the coming of the Lord. It is we who will bring restoration as the agents of God’s power in the earth.
Consider the prophecy of Joel:
“And it shall come to pass afterward, that I will pour out my spirit upon all flesh; and your sons and your daughters shall prophesy, your old men shall dream dreams, your young men shall see visions: 29 And also upon the servants and upon the handmaids in those days will I pour out my spirit. 30 And I will shew wonders in the heavens and in the earth, blood, and fire, and pillars of smoke. 31 The sun shall be turned into darkness, and the moon into blood, before the great and the terrible day of the LORD come.” (Joel 2:28)
Recent Posts