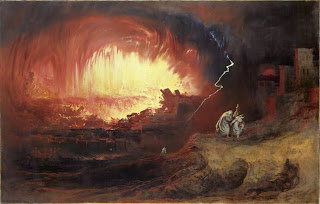 In Genesis 18 we read the infamous story of the destruction of Sodom and Gomorrah. I am fascinated by the account of Abraham and God bartering over the city’s demise.

“Suppose there are in the city fifty righteous,” Abraham asks, “will you destroy the place and not spare it for the sake of the fifty righteous in it?”

The Lord replies, “If I find in the city of Sodom fifty righteous, I will not destroy it.”

Abraham takes it further, “What if you find forty-five righteous?”

God concedes, “If I find forty-five, I will not destroy it.”

Abraham: “What if you find forty?”

Abraham: “What about thirty?”

God: “I will not do it if I find thirty there.”

Abraham: “What about twenty.”

God: “I will not destroy it for twenty’s sake.”

Abraham: “Suppose only ten righteous people are found there?”

God: “I will not destroy it for ten’s sake.”

God’s incredible mercy cannot be overstated, yet I think that this dialogue tells us a fundamental truth about Sodom. It was not destroyed because there were so many wicked people…it was destroyed because THERE WERE SO FEW RIGHTEOUS PEOPLE.

God agreed that He would spare the city if He could only find ten righteous, but I think Sodom’s fate would have been the same, even if God had agreed to spare it for the sake of ONE righteous person.

The Psalmist noted, “The Lord looked down from heaven upon the children of men to see if there were any who did understand and seek God. They are all gone aside, they have all together become filthy; there is none that does good or right, no not one. (Ps. 14:2-3)

Isaiah confirmed this when he said, “All we like sheep have gone astray; we have turned every one to his own way…” (Is. 53:6)

God would have spared Sodom for the sake of 10 righteous men. He may have even been willing to save it for the sake of one righteous man – but none could be found – Sodom was doomed. Notice that Abraham appeals to God’s sense of justice saying, “Shall not the judge of all the earth do right?” (V.25)

What is the difference between Sodom & Gomorrah and the world today? I think Sodom would blush at what is considered socially acceptable in this generation. I am convinced that the only reason that fire and brimstone doesn’t rain down upon us at this very moment is because a single righteous man has been found. He has drunk the cup of the wrath of God and “…the Lord has laid upon him the iniquity of us all.” In this season of God’s amazing grace, we have all been spared because God found one righteous man in the city. Where fire and brimstone once rained, today grace, mercy and forgiveness rain. Where Sodom found damnation, we find salvation. It’s no wonder the Gospel means, “Good News.”

Copyright © 2022 | Evangelist Daniel Kolenda
The Elijah GenerationArticles, Devotional, Posted from Home, Teachings
Jesus is the Hand that Steadies the PlatePosted from Home