The Great African Outpouring continues here in Karu, Nigeria! It is truly remarkable and sovereign what Jesus is doing.

This morning Rev. Peter Van den Berg and I ministered at the Fire Conference and the Holy Spirit fell on the thousands of pastors that gathered in a powerful way. I am sure that the impact will be felt in Karu for decades to come.

Tonight the crowd grew to over 300,000 and it is no exaggeration to say that multitudes received Christ. All of Heaven must be rejoicing. There were also many outstanding miracles.

–  A man who was totally paralyzed for 34 years was healed tonight. He had been unable to stand, sit, or even feed himself, but during the prayer, strength came into his body and he rose up and walked!

–  A girl who had been totally deaf and dumb for 10 years suddenly began to hear and speak!

–  A young man brought a diagnosis from 2006 that said he was HIV positive. But after receiving prayer last night, he went for another test this morning. He also brought that report and I read it to the crowd…”HIV Negative”!

Many other amazing miracles took place you can see a few of them in the attached pictures.

Tomorrow night is the final meeting here in Karu and we believe that Jesus has saved the best for last. Please continue to pray. This young girl had been deaf and dumb for 10 years and is now able to hear and speak! A man healed of HIV brings his report to prove he is healed!! 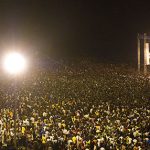 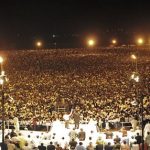