Our team has travelled and made it to the cities where we will hold our next two crusades beginning this week. As preparations are underway, I wanted to share with you the other amazing reports from our very fruitful crusades with our guest Evangelists from this past week. For tonight, I will share the reports from Evangelists Daniel King and Paul Maurer from their second to last night in Kahama, Tanzania! Please read them below:

“The third day of the crusade in Kahama, Tanzania, started with rain. As the music began, there were only a few people close to the stage. Most people were huddled around the edges of the crusade grounds trying to find shelter from the rain under overhanging roofs.

We began to pray, “God, please send rain to the farmers, but not to the crusade.” Soon, a breeze stirred and pushed the rain clouds away. When the people saw the clear sky, they left cover and ran forward to find a spot on the crusade grounds.

I preached a simple Gospel message about how God created us, how He loves us, how He came to save us and how He heals us!

When I gave the altar call, thousands of people prayed with me to receive their salvation. By lifting their hands they indicated they were ready to turn away from sin and turn toward Jesus. After the salvation prayer, the counsellors gave away copies of Reinhard Bonnke’s book, “Now that You are Saved” to all the new believers while taking down their details on the decision card for follow up. Then I talked about the final miracle…‘How God Heals.’

On this special night, I also had guest Evangelist, Paul Maurer with me, please see his report on some of the miracle testimonies that were shared below.

“It was raining when we left the hotel for the crusade tonight, and there were grey clouds, but the Lord held back the rain! When we got to the crusade grounds, there was so much joy and rejoicing as people were praising God! Evangelist Daniel King preached a dramatized message called, “The four miracles in the Bible” that really captivated the people. Thousands came to Jesus as the call for salvation was given.

Tonight, there were so many miracles and healings that the people were dancing to celebrate all that Jesus did!

We are so excited by what the Lord is doing in the city of Kahama, Tanzania!”

Truly God is pouring out His Spirit upon the precious people of Tanzania, and there are still two more Gospel crusades taking place this week. Be on the lookout tomorrow for more recaps from this past week! 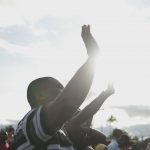 The Beginning of Something Great! – “Operation Decapolis” (Tanzania) – Day 4Articles 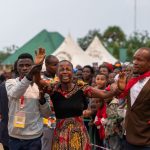