We have just concluded our final night of our three simultaneous Gospel crusades in Shinyanga, Tabora and Kahama, Tanzania. Tonight I would like to share the following report from Evangelist Jared Horton and their final night in Tabora, Tanzania:

“We just finished our last night of the Decapolis CfaN Crusade here in Tabora, Tanzania. What God has done in this city has been amazing! The local Pastors told us that there has NEVER been a Gospel event like this in the history of Tabora! Tonight was the biggest crowd; there were over 26,000 people in attendance. I preached a simple Gospel message, and again, thousands of people made decisions for Christ.

Tonight we also prayed for them to receive the baptism in the Holy Spirit. As they asked Jesus to baptize them in the Holy Spirit, suddenly the power of God swept over the crusade field, and thousands of people began praying in tongues and prophesying. It was truly a sight to see!

After we prayed for them to receive the Holy Spirit, Bootcamp Graduates David Clementi and Jim Weitner prayed for the sick and started taking testimonies. David and Jim are true men of God that have been in Tabora weeks before the crusade began, working diligently to make sure the crusade was a success. Without them, none of what happened in Tabora would have been possible.

Here are a few of the powerful testimonies from their time of healing ministry:

As we ended the crusade we encouraged everyone to get involved in a local church and to begin evangelizing their city for Christ. We let them know that tonight was not the end, but rather it was the beginning of what God is doing Tabora! We also took the time to speak blessing after blessing over them. We blessed their schools, educational system, businesses, finances, health, agriculture, water systems, government, police, marriages, children, families, and anything else we could think of. As Daniel Kolenda mentioned to them last night, we made sure they went home loaded down with blessings! Tabora will never be the same in Jesus name!

For me personally, it has been one of the greatest honors of my life to participate as a co-evangelist in this crusade. I have great appreciation to God and Evangelist Daniel Kolenda for this amazing opportunity. It is truly exciting to be a part of the “Decade of Double Harvest” Vision. We are going for 150 Million souls in 10 years!”

This is truly a historic time that would not be possible without your prayers and support. Over the next three days I will share with you reports from the last few days of crusade meetings that you haven’t seen yet, and next week we begin again in two different cities in Tanzania! Be on the lookout for these reports also. You will be blessed! 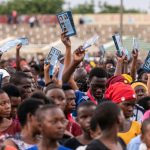 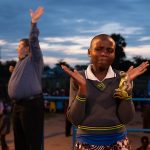