It’s been one week since we reached the conclusion of our Decapolis outreaches, and what a glorious conclusion it was! Our team is excitedly counting the decision cards, the local churches are ushering in the new converts and discipling them, and we are praising God for all He has done and thanking you for your tremendous support!

In Singida, we had guest evangelist, Paul Maurer, preach a powerful gospel message and we had our Bootcamp graduates pray for healing and record testimonies.

“Tonight the crusade drew to a glorious conclusion! People came wanting a touch from God, and the crowd grew substantially. In my message tonight, I asked the people the following question and formed my message around it: “What are you going to do with Jesus, who is called the Christ?” I said, “every man, woman, and child must answer this question in their lifetime.” At the end of my message, I gave them an opportunity to repent of their sins and make Jesus the Lord of their life, and I was amazed at the response. Many thousands raised their hand to give their life to Christ! More Muslims came to faith in Jesus tonight as well! I heard testimonies from this morning that the churches were already seeing new converts from the crusade! I love the emphasis that CfaN puts on follow-up, discipleship, and getting the people plugged into the local churches. Tonight, I noticed that the deliverance tent was again overflowing with people getting set free from demonic spirits. So many precious people received deliverance and healing this week! After I did a teaching on faith, three Bootcamp graduates (Joshua Hall, Michael-Seth Clifton and Jacob Ebersole) helped me pray for the sick, and the Lord did mighty miracles! I had a word of knowledge that tumors and growths were dissolving tonight, and it was a common theme that many tumors and growths disappeared in the name of Jesus!

To be able to minister at this crusade as a guest evangelist was the honor of a lifetime. I am so thankful to Evangelist Daniel Kolenda and the entire Christ for all Nations team! They work so hard to reach the lost. This week we saw the kingdom displayed with power, and I know the city of Singida will never be the same!”

“Tonight was the last night of the crusade in Singida, Tanzania. The last two weeks have been absolutely incredible with thousands of salvations, miracles, and people filled with the Holy Spirit. I am leaving Singida rejoicing in all that the Lord has done. I’ve heard several testimonies from the Bishops and Pastors today who are overjoyed as many new believers joined their church this morning. This is worth every dollar spent and every day away from family, to see people saved and planted into the local church. It’s not just making converts but to make mighty disciples of the Lord Jesus Christ! Hallelujah!

Evangelist Paul Maurer preached an incredible and powerful message tonight. Around 15,000 were in attendance tonight as the meetings grew in attendance from night to night. When Evangelist Paul Maurer asked for those who wanted to ask Jesus to be Lord of their life, hands were raised all over the field. Again tonight, as with the past three nights, many Muslims were in attendance and asked Jesus into their life – Glory to God! There is such sweet joy in the people in the city of Singida. People did not want to leave the field once the service was over. The hunger of the people to receive more from the Lord is something you cannot describe. Family members were bringing me pictures and clothing items; they were even praying over the phone for their loved ones.

As I sit in my room tonight, I reflect on the faces of the people…night after night, they race through my mind…I see them encountering the Lord. It reminds me of the day I met my Lord and Savior! A day the people of Tanzania will never forget.

Jacob Ebersole, Michael-Seth Clifton and Joshua Hall, three of the evangelism Bootcamp graduates, prayed for healing tonight, and many were healed. Here are some of the testimonies:

Wow! Look at what the Lord has done! I shout out a mighty HALLELUJAH!! As we give all the Glory and honor to the Lord!”

Look out for tomorrow’s final Missions Journal on our last night in Arusha, Tanzania! 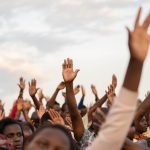 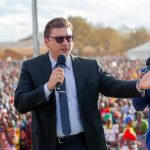