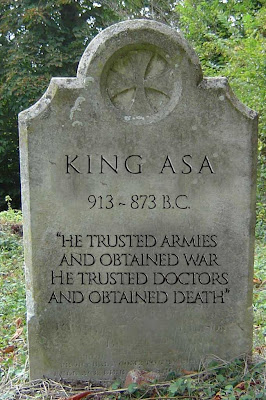 Have you ever heard the scripture found in II Chronicles 16:9, “For the eyes of the Lord run to and from throughout the whole earth to show Himself strong in behalf of those whose hearts are blameless toward Him…” It may surprise you to learn the context of that verse and the fascinating circumstances surrounding it.

Baasha, the King of Israel came up against Judah in war and tried to starve the people out by besieging the Ramah. So Asa, the King of Judah, “…brought silver and gold out of the treasuries of the house of the Lord and of the king’s house and sent them to Ben-hadad king of Syria…saying, ‘Let there be a league between me and you…break your league with Baasha king of Israel, that he may withdraw from me.’” (v. 2,3).

The Syrians, whose allegiance Asa had bought with gold from the Lord’s house came down and rescued the southern kingdom from the hand of Baasha. But the Lord was not pleased.

God sent a prophet named Hanani to king Asa with this message, “Because you relied on the king of Syria and not on the LORD your God, the army of the king of Syria has escaped from your hand. Were not the Cushites and Libyans a mighty army with great numbers of chariots and horsemen? Yet when you relied on the LORD, He delivered them into your hand. For the eyes of the LORD range throughout the earth to strengthen those whose hearts are fully committed to Him. You have done a foolish thing, and from now on you will be at war.”

Asa grew afraid in the battle and chose to trust in the king of Syria rather than in the Lord. As a result of this the Lord gave him over to the very thing he feared most, “…from now on you will be at war.”

What is so amazing is that Asa makes the VERY SAME MISTAKE again only 3 verses later: “In the thirty-ninth year of his reign, Asa was diseased in his feet – until his disease became very severe; yet in his disease he did not seek the Lord, but relied on the physicians. And Asa slept with his fathers, dying in the forty-first year of his reign.”

Asa trusted in armies and obtained war. He trusted in doctors and obtained death. The final verse of the chapter sums Asa’s life up with an almost contemptuous caption: “And they buried him in his own tomb which he had hewn out for himself…” In essence, Asa dug his own grave because he insisted on trusting in the arm of flesh rather then on the Lord. God was insulted by Asa’s disregard and gave him over to that which he feared most.

I wonder how many Christians are suffering today because they didn’t trust in and seek the Lord in the midst of their trial. Faith often seems like the more difficult option. It is so much easier to trust a lawyer, a doctor, a colleague or a counselor. But after trusting in all of these other things, so many people find themselves given over to the very thing that they fear and in that moment they cry, “Why God!?!” Don’t wait until your wheels have fallen off before you cry out to the Lord. Seek the Lord while He may be found and call on Him when He is near. View your difficulty as merely an opportunity for the Lord to receive Glory.