There was a time in my life (not so long ago) that I was quite a faithful little “gym rat.” Every morning I would show up and put in my time sweating, heaving and grunting until I had exhausted an entire day’s worth of energy before the sun had even come out. The bench press was my favorite exercise, and that’s where I could really shine. I would lie down on the bench, and my workout partner would put a couple of weight plates onto the barbell. I would press it once and ask for more. At my request he would slide another 44-pound disc onto each side and then I would press it again. “Give me a couple more,” I would say, and he would add more still. I would keep adding weight until my arms and chest felt like steam-rolled gummy worms. At the peak weight, I would say, “Stop…I can’t lift any more.” Believe it or not, my record was 300 pounds!

There were a couple of times, however, when I miscalculated and ended up under a load that was simply too heavy. I can remember once when this happened, and I had no spotter. It was a pretty helpless feeling. I watched in horror as the weight was slowly sinking down to my chest as though it was happening in slow motion. I was pushing with every ounce of strength I could muster, but there was absolutely nothing I could do. Finally the bar came to rest somewhere between my chest and my neck. I’m not sure whether I was more concerned about potentially suffocating or just looking completely ridiculous while doing so. My lower half was flopping around like a flounder while my jellified arms were trying desperately to keep the bar off my neck just long enough for me to grunt a pathetic distress signal of some sort. I think the other guys in the gym were debating over whether to help me or just laugh. 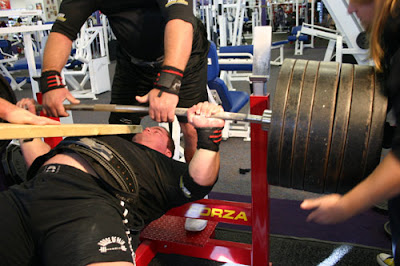 I was quite happy with my 300 pound record, but it seems pretty puny when compared to Ryan Kennelly (pictured left) who holds the world record in bench-press for lifting 1,075 pounds…an unthinkable amount of weight for any half-way normal person. But as remarkable as it is, even the mightiest person in the world has limitations. At some point we all will cry out, “Stop…I can’t bear any more.” At some point even Ryan Kennelly could be crushed under a load too heavy for any man.

But consider the infinite burden that Christ lifted at Calvary. He was beaten, whipped, and tortured before they nailed His mutilated body to the cross like a mangled piece of meat. But it wasn’t only physical pain that He endured. He bore the betrayal by Judas, the denial by Peter and abandonment by the rest of His closest friends. He bore slander and false accusations of His enemies. He bore the knowledge that he had been completely misunderstood by the angry mob full of people who He loved and had to endure the sight of his grief stricken mother as she was forced to watch His torment.

“Enough!” you can hear her say, “That’s my son…He’s done nothing wrong. Leave Him alone…this is one hundred times more than any man can bear.” 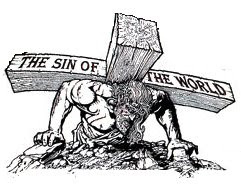 But He seems to look up to His Father through the blood and thorns and ribbons of lacerated flesh and say, “Don’t stop…give me more…lay it all on Me. Give Me the sins of the entire Jewish nation. Give Me the sins of all the Gentile heathen. After that lay on Me the iniquities and wickedness of every person who has ever lived since Adam and Eve sinned in the Garden 4,000 years ago. All the murder, the genocide, the rape, the wars, the human sacrifices, and the idolatry…the burden of all of history…drop it on Me.”

“Stop,” the Angels cry as they shield their faces, “That is enough…He is the darling Prince of Heaven. Don’t torment Him…this is one thousand times more than any man can bear.”

“No, don’t stop,” you hear Him say through bloodstained teeth, clinched in unwavering resolve. “Give Me more. Give Me the burdens of every person who has not yet been born. Lay on Me the sins of every future generation for the next 2,000 years: the burden of the prostitute, the drug addict, the adulterer, and the thief. Lay on My back the stripes of every slave, the chains of every prisoner, the darkness of every madman the bondage of every demoniac. Lay on Me all the anguish of hell’s most agonizing torment.”

God the Father turns His back on the unbearable sight of His Son. The sky turns dark as though the very door of heaven itself were slammed shut. He is utterly alone and completely forsaken by God and man. Never before has a human being experienced such emotions…emptied of all but love. Thunder peels in the distance the earth splits and the temple veil rips. The whole world seems to bend and creak as it’s laid upon His bloody shoulders.

“No more!” you cry. “Lord you’ve already done enough. This is a million times more than any man can bear.”

The world and everyone in it would have surely been crushed and suffocated under the unimaginable weight of our own sin. We were hopeless and helpless as the burden of it all was slowly sinking into our chest, and there was nothing that anyone could do about it. That’s when Jesus stepped in and rolled our burden onto His back. Finally, the weight of the world with its mountains of putrefying sin, sickness and bondage had been placed squarely on His shoulders. Not one burden remained that He had not lifted. It was a billion times more than any person could bear.

This is why Isaiah said that He “bore our sins and carried our sorrows.” This is freedom to the fullest. This is abundant life. This is joy unspeakable and full of glory. “Burdens are lifted at Calvary; Jesus is very near.”