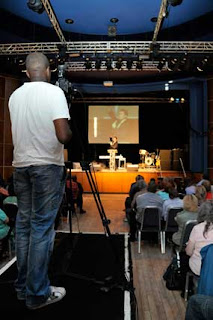 I have just returned back to the hotel room after a very full and very fulfilling day of ministry here in the United Kingdom. This morning I had the privilege to minister in the UCB television and radio headquarters. I ministered on the Holy Spirit, and then He fell in such a powerful way right there in the studio. It was recorded for international broadcast on television, radio and web. I pray that it might be a blessing to many people around the world.

Tonight we held an evangelistic meeting in Wulfrun Hall in Wolverhampton. I preached the Gospel to a packed house and then prayed for the sick. The Lord confirmed His Word with many wonderful healings. One lady began to go down a list of the various ailments that she had been suffering with…I lost count after the sixth one. She said that suddenly realized that she had been healed and began to jump…something she hadn’t been able to do in nine years. The band began to play, and the whole room was bouncing and dancing with her as we sang, “Oh happy day, happy day, you washed my sin away…”. That song seemed to describe the way that everyone was feeling quite nicely…there was a palpable, tangible sense of happiness and joy that only comes from the presence of the Lord. It was a powerful night. 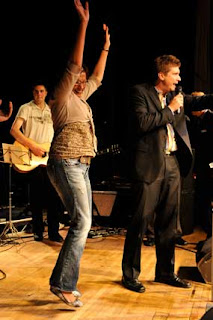 Tomorrow we move on to Ilkeston for morning and evening meetings there. Please continue to keep our entire team in your prayers.