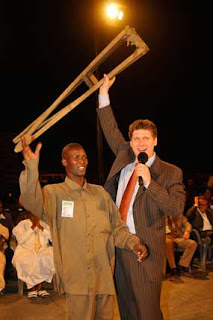 Unbelief often infiltrates our hearts in the most covert ways. Sometimes we don’t even realize that it’s there. It is good from time to time to take stock of our own belief system to see what is based on God’s Word and what is simply something that we have heard repeated, even by godly leaders, and accepted as fact.

One of the most common questions that people ask me is, “Why do these incredible miracles happen in Africa but not in the western world?” I have heard very well known and well-intentioned ministers give entire teachings about why God doesn’t do it here. I have even heard one use Reinhard Bonnke’s crusades (where I preach) as an example. Some of the explanations I have heard are actually very rational and really explain in detail why it works this way. I must admit, for a long time I also had various answers to this question. And then one day, it occurred to me…the problem is revealed by the question itself.

Hebrews 11:6 says, “…He that cometh unto God MUST BELIEVE.” Anyone who approaches God with the preconception that God heals there but not here (wherever “here” and “there” may be), has already prophesied the outcome of there own request. You cannot approach God like that. Faith is the fundamental basis upon we can and must approach the Almighty.

Where did we get the idea that God does greater miracles in third-world countries than he does in the west? Many people, in asking this question, have just accepted this notion as fact, but what data is it based on? There is certainly nothing in scripture to support it. I can tell you from my own anecdotal experience, as one who ministers all over the world, that THE POWER OF GOD IS THE SAME in the Western world as it is in Africa, Asia or any third-world country. I just returned a couple weeks ago from a tour in the United Kingdom. We saw incredible miracles in every single service. Tumors were disappearing, deaf ears opening, arms, legs and eyes instantly healed. In fact, given the relative numbers, I would say that in many places in the west I have seen more healings then even in Africa – you can’t tell me that miracles don’t happen in the west!

Psalms 78:40, 41 gives us some fascinating insight on God’s frustration with the Children of Israel in the wilderness. It says, “How oft did they provoke him in the wilderness, and grieve him in the desert! Yea, they turned back and tempted God, AND LIMITED THE HOLY ONE OF ISRAEL.”

Of course the Children of Israel had seen great wonders and signs unlike any generation of human beings before them. They knew that God was powerful, but they subjected Him to a set of parameters and constraints based on their own experiences. God was provoked and grieved by their limitations and allowed their doubt to become a self-fulfilling prophecy (ie. Ex. 14:11 the Israelites say, “Because there were no graves in Egypt, hast thou taken us away to die in the wilderness?” – Num. 26:65, God says, “They shall surely die in the wilderness. And there was not left a man of them, save Caleb the son of Jephunneh, and Joshua the son of Nun.”)

Even Jesus had a taste of this in His own ministry. When He returned to His hometown Mark 6:5 says, that He was not able to do any miracles there. I can just hear the locals asking each other, “Why do miracles happen in Jerusalem and not in Nazareth?” Their unbelief was literally enough to limit what He was able to do in their midst. Their unbelief had become a self-fulfilling prophecy.

The philosophy that God doesn’t do it here, is nothing more than an insidious, demonic doctrine of unbelief, and I, for one, refuse to humor the bogus assumption discretely tucked into the question any longer. How has Satan managed to get us to buy into this baseless lie wholesale? It was in the west that the Great Awakenings took place. It was in the west that people like Smith Wigglesworth, Kathryn Khulmen, William Branham and all of the great healing evangelists of the 30’s 40’s and 50’s witnessed some of the greatest miracles in recorded history. It was in the west that the Holy Spirit was poured out in Wales and Azusa Street and the Hebrides. The Charismatic movement, the Jesus People movement, the Toronto outpouring and the Brownsville Revival, all happened in the west.

It’s worth mentioning that this is not a uniquely western problem…it is a human problem, a problem of unbelief, a problem of limiting God. You see, for some reason, many have subconsciously bought into a philosophy that says miracles can happen everywhere except here. Those in the west find it easy to accept that something miraculous can happen far away like Africa or Asia. But I have also heard those in Africa and Asia talk about the wonderful things happening in America. The voice of unbelief says that anything can happen…somewhere else. This is not faith and it does not please God.

What other notions have we adopted into our belief system that limit God? Maybe we will find that some of our great questions have a very simple solution, one that we have actually known all along, “He that cometh to God must believe…”