Many preachers lose their children while rescuing other people’s kids. I have prayed, “Lord, don’t let me win the whole world and lose my family.” I feel like the Lord showed me one of the reasons why this happens so often and how to avoid it. It is especially applicable to those in ministry, but the principle is true for all parents. I want to share it with you this Father’s Day.

Imagine being the son of a prostitute. This is the stigma that Jephthah carried all of his life. The rest of his brothers were all legitimate children that had no intention of sharing their inheritance with a bastard son. So they kicked him out of the family and he fled – face red with shame – to the land of Tob. The rejection of his childhood produced within Jephthah an insatiable desire to prove himself. His background meant that he had to try a little harder, be a little better and stand a little taller then normal people if he wanted to break even. His ambitious predisposition led him to quick success in Tob. He became a mighty warrior, renown for his valorous exploits. He became popular and powerful and infamous, but in spite of all his success there was a gnawing void in his heart left over from his childhood. He wanted more than anything to be accepted by his father and by his brothers. For them to accept him, as the rest of the world had done, would have been the greatest honor of all and the crowning gratification of all his life’s ambition.

One day Israel’s trouble became Jephthah’s moment of opportunity. Ammon was making war against them and Jephthah’s brothers, afraid for their lives, sent him this message: “Jephthah, Come and be our captain, that we may fight with the children of Ammon.” Jephthah had waited for this moment all of his life. He had fantasized about what he would say to his brothers in such an occasion. “Didn’t you hate me?” he asked, “and expel me out of my father’s house? Why have you come to me now when you are in trouble?” He went on to make a deal with them. “If you bring me home again to fight against the children of Ammon, and the Lord delivers them before me, will you make me your leader?” And they swore it would be so.

Everything that Jephthah had wished for, hoped for and dreamt about was now completely within his grasp. All he had to do was win one more battle, and he was willing to do anything for this victory. After making all of his military preparations, he decided to cover all his spiritual bases as well. He went to the Lord and made a vow, “If you will give the Ammonites into my hand, then whatsoever comes forth from the doors of my house to meet me when I return in peace from the Ammonites, it shall be the Lord’s, and I will offer it to him as a burnt offering.” Notice how many times he uses personal and possessive pronouns, “my hand”, “my house”, “ meet me”, “when I return”, “I will offer”, etc. To Jephthah, this was all a very personal matter. This was about Jephthah’s honor. This was about Jephthah’s name. This was about Jephthah’s vindication, and reputation and compensation. He was willing to pay any price for victory. But he had not considered who would pay the ultimate price of his self-ambition. 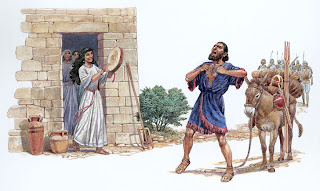 Verse 34 says, “When Jephthah came to Mizpah to his home, and behold, his daughter came out to meet him with timbrel and with dances! And she was his only child; beside her he had neither son nor daughter. And when he saw her, he rent his clothes and said Alas, my daughter! You have brought me very low, and you are the cause of great trouble to me; for I have opened my mouth [in a vow] to the Lord, and I cannot take it back.” Jephthah was compelled by his vow to offer his daughter as a burnt sacrifice. But he sacrificed her not on the altar of the Lord but upon the altar of his ego-driven ambition. Even here we see that it is still all about Jephthah. His daughter is about to die because of his stupid vow, yet he says, “You have brought ME very low and are the a great cause of trouble for ME…”

What is so sad about this story is that this terrible tragedy was so senseless. God had long ago promised to give all these Canaanite nations into hands of Israel, for His own name’s sake. Jephthah failed to realize that this was not about him at all…it was about God’s name, God’s glory and God’s reputation. This battle was the Lord’s, and the Lord had already decided to give him the victory. Had Jephthah only had this revelation, his daughter would not have been sacrificed on the altar of self-ambition.

Many fathers today (especially ones in ministry) can easily make this same mistake. Many are so driven by a desire to succeed or even a desire to “build God’s Kingdom.” We can easily forget that this is not about us…it is about Jesus. Ministry is difficult and there is a cost for those who would answer the call of God, but there is a difference between obedience to God’s calling and ego-driven, self-ambition. When the latter is the driving force behind any father, the cost will almost always be his children and his marriage. I have seen this many times.

H.B. London told the story of a young boy who wanted more than anything to build a tree house with his father. The boy longed for the attention of his father who was always busy with more important things; business meetings, balancing checkbooks and working on the house. One day the boy was involved in a terrible accident and lay dying in the hospital. The father sat at the bedside of his dying son choking back the tears when his son turned to his father and said the last words he would ever hear…words that shattered his heart into a million pieces, “I’m sorry Dad,” he said, “it looks like we won’t get around to building that tree house after all.”

How many fathers have sacrificed what is precious on the altar of the urgent. How many have surrendered their children at the shrine of work, success, money, leisure or ambition. I am sure that kids can sense the difference between our wholehearted obedience to God and our selfish aspirations and if we are wise, we parents will also recognize the difference. Jephthah should have laid his ego down on the altar, but because he didn’t sacrifice that part of his personality, he ended up making a far more painful sacrifice…his only child. Listen to this word of wisdom men of God; if you are driven by a desire for success, fame, money or popularity, you will pay for it with your family. But I believe that if we will lay down our egos and recognize that the battle belongs to the Lord, we will ultimately realize the same level of lasting fruit and true success that we would have and then some. But what’s more, in the end, when God has given you a truly satisfying and fruitful life, you will still have somebody to celebrate it with…your family.

God Bless you this Father’s Day and give you wisdom as you follow His calling.

Copyright © 2022 | Evangelist Daniel Kolenda
What’s Your Lucky Shamrock?Articles, Devotional, Posted from Home, Teachings
A Word for the United Kingdom – THE TIME IS NOW!Posted from Home