This morning Rev. Peter van den Berg and I ministered to the pastors and church leaders at the final meeting of the Fire Conference.  The way that the people received was so precious.  It was simple.  It was easy.  It was all Jesus.  At first they were silent.  And then it began – all over the field pent up fountains began bursting forth and soon the whole crowd was swimming in a river of Holy Spirit unction.  It was wonderful.

This week evangelist Eric Gilmour has been ministering each night before the Crusade begins.  He has been teaching on faith and ministering to the sick.  God has been using him in a mighty way and literally hundreds, perhaps even thousands, have raised their hands indicating that a miracle has taken place in their bodies this week.  All the glory goes to Jesus.

Tonight we saw how a boy’s blind eye was healed.  A little girl’s, night blindness was healed.  An insane man came to his right mind.  A deaf girl received her hearing.  A crippled boy can now walk.  A paralyzed woman was healed and many more!  Praise the Lord!

Tonight I also invited evangelist David de Vos, who is visiting from the Netherlands, to share a short Gospel shot before I came to preach the main message.  The people were very blessed by his ministry.  I’m so thankful to the Lord for a new generation of Holy Spirit evangelists that He is raising up in these days.  The future of evangelism is very bright!

It’s hard to believe that tomorrow night is the final night here in Cotonou Benin.  We are praying for one more huge harvest and a final blow to the kingdom of darkness.  Thank you for continuing to uphold our arms in prayer. Evangelist Eric Gilmour preaching on faith and healing before the preaching of the Gospel.

This crippled boy was healed tonight and threw his crutches away! (See picture) This girl was deaf until Jesus healed her tonight! 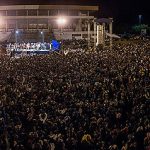 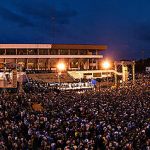