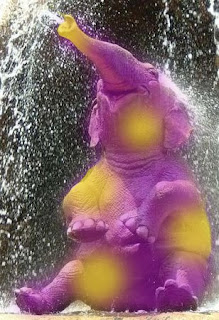 He’s half Elephant, half Hippopotamus, all purple and sports bright yellow polka dots…he’s the Purple Polka-Dotted Elepotamus. Some people say that he doesn’t exist, but I challenge them to prove it. It would be impossible to conclusively certify the non-existence of such a creature with scientific certainty, no matter how obviously ridiculous it may seem. In order to do so, one would have to be able to observe every inch of every corner of the entire cosmos all at the same instant.

This is what is referred to as a “Universal Negative”. Simply stated, it is scientifically impossible to prove the non-existence of anything…if this is true in the natural world, how much more in the invisible world of the supernatural. Perhaps this is the reason that there have been so many supposed “gods” in the world throughout history.

If you could find someone who could see everything, even what is invisible, in every corner of the cosmos all at once, he would not be restricted by a finite power of observation and thus able to confirm a Universal Negative. Fortunately for us, we know just such a person. He is omnipresent…meaning that He is everywhere at once and nothing is hidden from His eyes (Jer. 23:23, 24). But what’s more, He is also omniscient…meaning that He is also all knowing and of infinite understanding (Ps 147:4,5). This One who is everywhere present and knows everything there is to know asks, “IS THERE A GOD BESIDE ME? YEA, THERE IS NO GOD: I KNOW NOT ANY.” Isaiah 44:8.

Dear searching soul, listen to the creator of the universe who has sees all and knows all and save yourself the pointless frustration of a life filled with endless, futile searching. He has examined the furthest reaches of the universe and, explored under every rock and tree. He has investigated the deepest depths of the Marianas Trench and scaled the highest peaks of Mt. Everest. He says, “I’ve looked everywhere. I’ve seen everything. I know the every answer to every question and yet I don’t know of any God beside me. There is no other God…trust me, I’ve looked.”

His infallible testimony is all the evidence I need. I may not be able to prove the Universal Negative of the Purple Polka-Dotted Elopotamus, but one thing is conclusive; there is no other God besides our God.