A friend of mine is visiting from Israel where many people go to get a sense of what it was like in Biblical times. That may be effective if you want to see geography, but if you want to know what the ministry in Jesus day must have been like, come to Mubi!

This afternoon, a group of us decided to go to the crusade ground after lunch (around 2:00 pm). What we saw was very touching and incredible. More then 50,000 people were on the grounds. Many were standing or sitting on the ground, waiting for the evening service, unwilling to give up their good spot. Others had built shelters where they were living throughout the week. It’s hard for a western mind to imagine such hunger and tenacity. It made me think of Jesus ministering on the hillsides to the multitudes of people that stayed with him…sometimes for days.

An entire village had been constructed around the periphery of the gigantic venue. Shops, restaurants, a hospital and housing make up this huge marketplace where you can literally buy anything from crafts to underwear. It was truly incredible. (I will try to get pictures of this to post tomorrow.)

The scope of this event is so vast that it is almost as if a city has been built here just for the week. People will be born and people will die right here on the crusade ground this week. Many languages, people groups, cultures and religions are represented. I don’t know what it can be compared to anywhere else in the world. 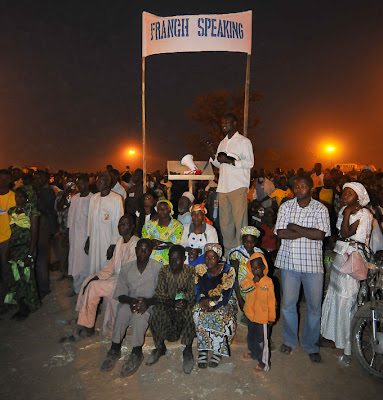 The Crusade tonight was awesome. The crowd grew to 425,000 and this is only the second night! After the prayer for salvation, there were many fascinating miracles and powerful testimonies. One man whose little boy had been healed brought an offering of thanksgiving…a live chicken! We will probably eat him before the week is over.

One man testified of being healed from blindness last year at our crusade in Yola. He announced to the people that he was a Muslim before Jesus healed him, but now he is a Christian and the crowd erupted in cheers. It is certainly not going to be popular to be anything else by the end of the week.

The mother in the picture below touched my heart so much. She brought her little daughter to the meeting praying that Jesus would heal her. During the prayer for the sick the mother put the little girl on her shoulders, covered her eyes and told her, “Look up to Jesus.” After the prayer she put the girl down and to her amazement she started to run around able to see. The whole time the mother was telling the story, the little girl was touching my hand and touching my shirt and touching the microphone…everything was brand new. Then I began to test the girls eyes and when the mother saw how well her daughter could see, the tears began to gush out of her eyes and down her cheeks. I really believe that it was through the faith of the mother that the little girl was healed. 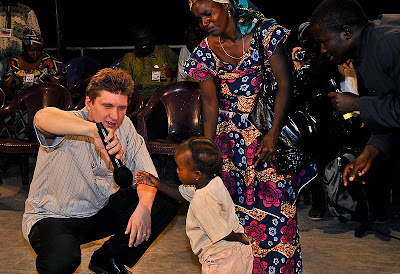 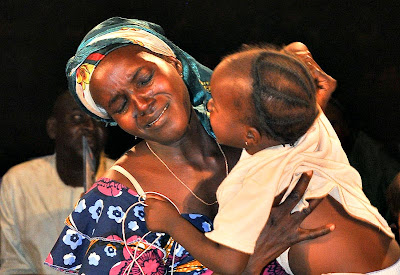 One lady brought her mother who was paralyzed. The woman could walk and run and even jump…she was SO healed! You can see in the picture below, the daughter was overwhelmed, weeping for joy. She told me, “My mother has suffered for so long, but now Jesus has healed her”. 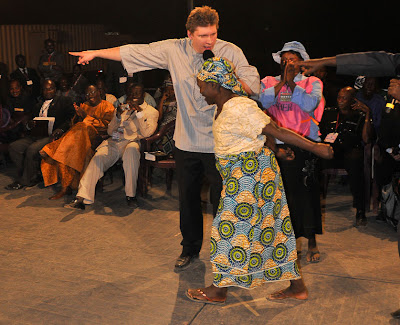 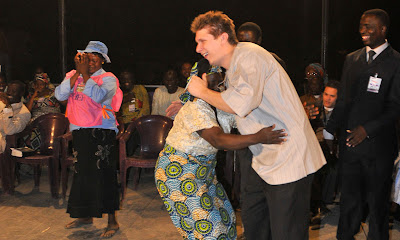 Again…many blind eyes were opened and many cripples walked, along with an assortment of all types of sicknesses and diseases. Jesus is certainly alive and well in Mubi, Nigeria.

I have posted Evangelist Bonnke’s full report from tonight’s meeting below. 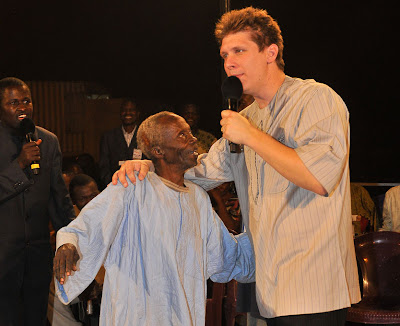 Today, the second day of the Mubi-Crusade saw an increase in attendance from 350,000 to 425,000 people. Evangelist Daniel Kolenda ministered tonight. It was pure and powerful Gospel and a great number of people received Jesus as their Savior.

This afternoon we were on the gigantic Former Army Shooting Range field, our crusade-venue, and were overwhelmed: around 50,000 people were camping out there in the dust… waiting for the evening service. This is the way it must have been in Israel during the days of Jesus when the crowds followed him, except that the crowds here are much bigger. Yet the same Jesus was also here tonight and again a flood of miracles followed the prayer for the sick: A mother came with her blind child. In tears she told the story of how she had put the child on her shoulders during the prayer for the sick and said, “Look up to Jesus”. She laid her hands on the baby and instantly the child’s eyes were opened! (See attached picture). Once again many other blind people received their sight and many cripples walked. A paralytic testified to total healing and a woman with a swollen belly said that during the prayer she watched as the belly shrank to normal size right before her eyes!

This morning the people gathered already at 5 AM for the Fire Conference and Peter van den Berg and I preached. We want God’s people to swim in God’s river of living water! God never supplies anything lifeless. In the Bible, water is living water, fire is living fire, bread is living bread and joy is living joy – living happiness. God does not operate a production line. He is involved in a perpetual action of newness, renewing, creating every moment, just as every moment the sun generates new light and heat. He is our Sun, our burning light, filling all our horizons with His glorious light and strength. He shines in Mubi-Land!
The momentum here is increasing wonderfully. Please continue to pray for us. We love you and pray for you too.

Yours together in the Harvest with the whole CfaN Team,
Evangelists Daniel Kolenda and Reinhard Bonnke.