The “Hamatan” is a northerly wind that blows dust from the Sahara desert into Nigeria at certain times during the dry season. When it blows in, it obscures visibility, the sun looks like the moon, and everything on the ground is covered with a very fine, rust colored powder, similar to a woman’s cosmetic pressed powder. 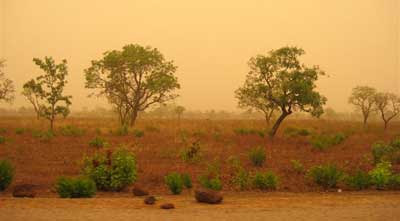 We see it often here, but never before like this. Today it looked as if a thick fog had settled over the region impairing visibility and blocking out the sun. The last crusade a couple of weeks ago was in a swamp. Now we are in the desert under a cloud of dust. But nothing can stop the people. Their hunger is a force to be reckoned with, and they will not take no for an answer. I see in them the tenacity of the woman with the issue of blood…pressing in to apprehend the miraculous by faith!

Tonight we got the call to come to the crusade ground early: a good sign of a large crowd. We arrived on the gigantic field to find 350,000 people waiting to hear the Gospel!!! This is only the first night of the crusade, but already it is almost as large as the final night of the last one!

Evangelist Bonnke preached on the Blood of Jesus and broke curses of the region. As he was preaching demons were coming out, and then, after the prayer for the sick, the miraculous broke out like a pent up river. Across that huge field, like popcorn, sections of the crowd were erupting in jubilation as another cripple walked, another deaf mute heard and spoke, another blind man or woman could see.

At the foot of the stage hundreds of people pressed in, like sheep in a crowded pen, to give their testimonies of healing. Our workers were testing those who had been healed. It looked like Wall Street. One man would shout over the crowd, “Blind 10 years…two eyes!” as he held up two fingers; another would shout out the miracle he had just confirmed and another…it was a holy chaos! So many blind people were healed tonight. At one point a crowd of previously blind people all gathered around Evangelist Bonnke to testify (see picture below) 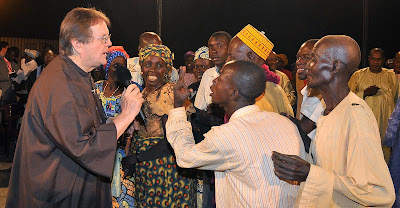 I have pasted Evangelist Bonnke’s report from tonight below as well. More to come tomorrow!

The first meeting of the Gospel Crusade in Mubi just finished and we returned to the Lodge. It was a glorious start. 350,000 people attended tonight! Have a look at the awesome picture. The Word of God and His presence penetrated each and everyone with multitudes repenting of their sins and receiving Jesus Christ as their Savior. The field is the biggest we have ever had. It could hold 5 million people, which possibly is way above the population in this rural area. Nevertheless we want to harvest every soul available for Jesus. Miracles happened non-stop! So many blind received their sight. See the picture of the Muslim gentleman with the yellow hat. He was 8 years totally blind, but Jesus healed him!

It moves our hearts to see the mass of people that have arrived under their own steam from the surrounding towns and villages and now camp on the dusty field until the end of the last service on Sunday. Jesus loves each and every one of them. We read that the Lord had a special eye for the unwanted, like Zacchaeus, the Samaritan woman, the Roman soldier, and the blind beggars. He knew the best of them … and the worst. He saw the fears, felt the despair and recognized the courage of little people. He was the supreme champion of the needy, the Saviour of their souls and the healer of their sick bodies. How similar the situation is today. JESUS IS THE SAME TODAY. His ministry continues through us His servants.

Thank you for praying for us. We are very grateful indeed. We cannot do this work without you. Don’t forget to open the attached pictures please – you will be greatly blessed.

Yours together in Harvest with the whole CfaN Team
Evangelists Reinhard Bonnke and Daniel Kolenda. 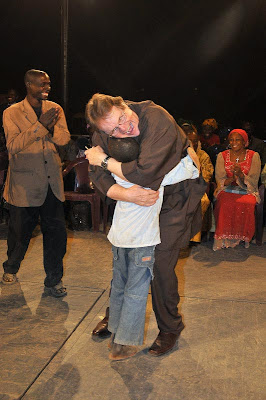