I am SO EXCITED to be sending this report to you from Tanzania. I realize this report will be quite a bit longer than usual, but you must understand – what is happening right now is historical and extremely significant. What has happened tonight has been the culmination of more than two years of planning in obedience to the word of the Lord. You may recall that I felt the Lord speak to me that we should multiply laborers for the sake of the harvest. So we have been working diligently behind the scenes, building multiple sound systems (that you helped us build), training up new technicians, crusade organizers, and evangelists. Our many “Pre-Crusade Mobilization” initiatives were part of the planning and testing phase. The Evangelism Bootcamp was also launched as part of this strategy. But TONIGHT OPERATION DECAPOLIS LAUNCHED! Tonight three simultaneous crusades started in three different cities. Next week, two more crusades will be conducted, in two more cities, for a total of FIVE CRUSADES IN FIVE CITIES over a period of TWO WEEKS! Throughout the next two weeks, I will be traveling from city to city, preaching one or two nights in each location where a crusade is already ongoing. This is true multiplication – and it is only the beginning!

Now, the word Decapolis means “10-Cities.” Originally the plan was to conduct 10 crusades in 10 cities over 2 weeks in Kenya. But due to COVID restrictions, those cities in Kenya were completely off-limits. Our amazing team of technicians and organizers (the best in the world) managed to shift everything in a matter of days to new cities. Even with extremely limited time and facing enormous obstacles, they have managed to do the impossible. Here we are. The crusades started tonight unimpeded, and we are off to an amazing start.

Tonight and tomorrow night, I will write the mission report myself because I want to introduce you to the co-evangelists that are working with me here and also introduce you to the Operation Decapolis Strategy. Then, we will be sending you, night after night, the reports from these co-evangelists themselves and I know you will be so blessed. Finally, on the last night, I will write the report again just to summarize and celebrate what God has done here during this historic week.

Tonight, Crusades took place in Shinyanga (where Gary Smith preached), Tabora (where Jared Horton preached), and Kahama (where Paul Maurer preached). Here is a summary from each of them:

Evangelist Gary Smith writes: “The moment I got on the first flight to Shinyanga, Tanzania, I began to weep in the presence of the Lord. During the multiple flights, I was still encountering the mighty presence of the Lord that continues to stay and has not lifted from me, nor do I want it too! Glory to God.

As we arrived in the beautiful city of Shinyanga, I could feel the excitement in the air as this city has been saturated in the presence of God. For weeks the CfaN Bootcamp graduates have been preaching in the schools and marketplaces, and the crusade committee has been meeting with all the officials. This city has also been blanketed in advertisements.

…Upon arrival to the crusade, I could feel the presence of the Lord. Immediately I began to minister on the urgency of a life totally surrendered to the Lord and that NOW is their time of salvation. As the message was being preached people that were in the stands began to make their way to the altar area, and those that were in the field also began to get closer to the platform. I gave the invitation for them to ask Jesus to be Lord of their life and if they were ready to give Jesus their whole life and not just a part of their life…Not only were thousands saved, but there were also hands lifted all over the entire field that said Jesus has healed them. From the very back of the stadium to the far left and right, hands were lifted high as the Lord healed them! Glory to God.

The testimony line grew longer and longer as people were excited to tell what the Lord had done for them. There was a lady that had a tumor in the lower part of her stomach. She had just been to the doctor’s office only 2 weeks ago to schedule an appointment for the removal of the tumor. The tumor caused much pain, and she testified that the tumor was gone and that there was no pain. With much excitement and joy, I told her that she does not need to have the operation any longer because the great physician just performed surgery on her free of charge! Hallelujah. Another woman testified that her sight, and her ability to walk, was restored. This lady was not able to see further than just a few feet in front of her, and during prayer, her eyes completely opened, and she was able to see the back of the stadium, which was over 100 yards in the distance. I’m in complete joy and celebration of all that the Lord has done in the city of Shinyanga and I’m excited for the 3 days to follow in this crusade. I know that each night will grow and grow from glory to glory. “

Evangelist Jared Horton writes: “I just made it back to the hotel and all I can say is…WOW. I knew there would be a lot of people at the crusade, but to walk onto that platform and see a massive crowd in front of you is a lot to take in all at once. It is something that brings tears to your eyes. Just seeing all the beautiful Tanzanian people so hungry for God and so open to what we have to say is amazing.

Tonight in Tabora, Tanzania, I preached a simple Gospel message, and right as we began to pray the prayer of salvation, literally all over the field people began to manifest demons. Immediately, the ushers began to carry them through the crowd to the deliverance tent. Being this was my first time to preach a crusade of this size on the platform with Christ for all Nations, I was a little taken back by what I was seeing happen before my eyes. I almost did not know what to do for a few seconds. Then over the microphone, I simply asked the Holy Spirit to come. I began to plea the blood of Jesus over the field and rebuke every demonic spirit, then quietly waited on the Holy Spirit to finish His job. After things calmed down a little, I reverently continued with the decision cards. It was truly a Holy moment on the field.

After the people prayed the prayer of salvation and filled out decision cards, I came back and prayed for the sick. Here are a few of the outstanding testimonies:

· A man who had only 10% hearing in both ears for 19 years received complete healing when both of his ears opened up.

· A lady who had fibroids in her stomach received complete healing as they disappeared during the prayer for the sick.

· A man’s right arm was numb for 1 year. During the prayer, all the feeling came back to his arm.

· For many years a lady’s right arm was numb and only had 25% mobility. After we prayed, all the feeling came back into her arm, and she could use it as normal.

· After the meeting, Bootcamp graduate, Evangelist David Clementi prayed twice for a deaf man, and after the second prayer, both his ears popped open.

The local Pastors were greatly pleased with the outcome of the first night. The fact that God showed up in such mighty power is an indicator of what is going to happen in the next 3 nights!”

Evangelist Paul Maurer writes: “Tonight I preached a simple Gospel message and had a tremendous response. Thousands gave their lives to Jesus! It was a beautiful sight to see so many Tanzanians give their lives to Christ.

When I started praying deliverance prayers, demons began to manifest all over the crowd. Demonized people began screaming, shrieking, and rolling around on the ground as the demons responded to the name of Jesus. I heard that witchcraft is very prevalent in the area, and I guess that explains why so many needed deliverance. The team told me that the ‘snake pit’ was overflowing with people! It was a joy to hear reports of them getting set-free!

There were some notable healings:

· One woman could not walk properly for 18 years. She said she was very stiff, and people had to help her move around. For the past 2 years, she was in a lot of pain, felt weak, and had to use a stick to walk. After prayer, she was completely pain-free and no longer had to use her walking stick.

· One man had epilepsy for more than 10 years. He said during the healing prayer he felt the power of God go into his body, and he believed that Jesus healed him.

· One woman had been in severe pain from gout in both of her legs. She had been on a very strict diet so that she could get better. She also could not sleep because of the gout. During the healing prayer, she said she felt the power of God enter her body and all of her pain left! As she was sharing her testimony on the platform, I saw a tear appear on her eye. It wasn’t tears of sadness but tears of joy because she was so thankful for what Jesus did for her.

· At the end of the meeting, a mother came up to me with tears in her eyes. Her son was 3 years old, and he never spoke a word in his life. Tonight he spoke for the first time and said the word “Mama.” She was so happy!

It was such an honor to be able to be a guest evangelist at this crusade and I am so thankful to Evangelist Daniel Kolenda for the opportunity.”

Thank you for praying for us here in Tanzania. More to come tomorrow. 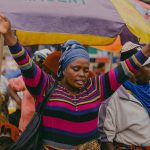 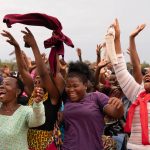