Yesterday my Father-in-Law had to put down the family pet. Daisy was a cute little silky haired terrier that was 15 years old. In dog years that would make her…um…really old! Her poor little body was starting to break down and putting her out of her misery was the only humane option. When my 4-year-old son, Elijah, heard the news over the phone he began to cry. “Daddy”, he said as he climbed into my lap, “I miss Daisy.” I must admit, it was a bit of an emotional moment. I was heartbroken to see his little heart broken. Even though a pet is just an animal, there is some strange bond that develops in our hearts as we become familiar and acquainted with it. This anthropomorphic, emotional attachment is very illogical, but it is an inherent human propensity that can be traced back to the earliest times of our history. 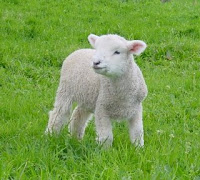 It is interesting that in Exodus 12, God gives very specific commands about the preparation of the Passover sacrifice. In verse 6 He gives a most curious instruction regarding the sacrificial lamb: “And ye shall keep it up until the fourteenth day of the same month…” Literally they would take this small, one year-old, little lamb out of the flock and bring it home for fourteen days until Passover. During that time the family would have undoubtedly become attached to this cuddly, little fur ball. The kids would play with it and sleep next to it and name it. The parents would feed it every day and clean up after it. The price of a lamb could be measured in silver shekels, but once it had become a member of the family, its value transcended money…it was priceless.

Then Passover came. They took the little family lamb and killed it. The blood was painted on the two vertical, side posts and on the horizontal, upper post of the door to the house. The children probably stood by weeping, and buried their faces in their mother’s apron as the father with a heavy heart, brushed the blood on the posts. But where the horizontal and vertical strokes met, on the upper corners of each doorframe they formed a cross. Unknowingly, with this priceless sacrifice, they had painted a timeless symbol of the glorious salvation to come.

The Passover lamb had to be more than a gyro and lamb chops because it was a prophetic foreshadowing of Jesus Christ – the Lamb of God who would take away the sins of the world. The death of the Passover lamb needed to have profound meaning in the hearts of the family that it died for. They needed to somehow experience some sense of loss, of pain and of sorrow. For this sacrifice was a type of the day when the Father Himself would be separated from Jesus for the first time in eternal history. He would watch as His beloved Son was sacrificed before His eyes on a cruel cross and His precious blood shed for the sins of the world. God wanted Israel and us to know that Calvary was not some religious, liturgical formality. It was a deeply personal and painful experience for all of Heaven’s family. He paid so high a price for us…I’m sure that we will never fully understand.