The Gospel is not Good News for everyone. To the principalities and powers that have held Sapele in bondage for generations, the Gospel is a declaration that their demonic kingdom has come to an end. The keys of death, hell and the grave have been confiscated and Jesus Christ is Lord of all!

Tonight I preached about the power in the blood of Jesus to save, to cleanse, to heal and to protect. After the prayer for salvation, I called out the names of the local curses one by one and broke their power over Sapele in the name of Jesus! It was an emancipation proclamation and it seemed as if every one of the more than 100,000 people in attendance received it with dancing and rejoicing as though their day of Jubilee had finally come. 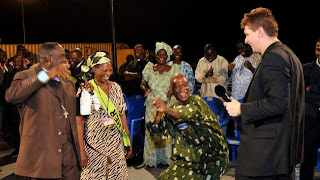 This picture is of a man who told us the incredible testimony of his healing. He had been insane for the last seven years. Also, he was partially blind and paralyzed. Because of all his problems his wife had left him. But last night he was totally healed. His right mind returned to him as well as full use of his body and eyes. And the greatest part of all is that his wife had heard about his dramatic healing and CAME BACK TO HIM. He told us that she was there in the crowd waiting for him. The crowd went wild as he danced for joy. His mother stood at his side and confirmed this incredible story.

The picture below is of a woman whose tumor instantly disappeared tonight.

What an incredible night! We are truly rejoicing and praising the Lord! More to come tomorrow… 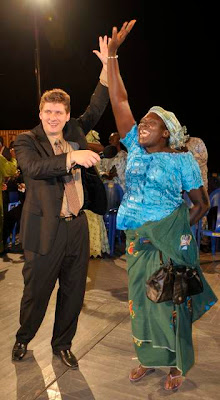