We have just returned from the first meeting of this Great Gospel Campaign here in Sapele, Nigeria where the atmosphere was absolutely electric! 75,000 people attended tonight’s opening meeting and brought with them an eager expectancy and hunger that was truly remarkable. As I preached, it felt as though the people were drawing on the anointing through their faith. I knew right away that mighty miracles would happen tonight and sure enough, after the prayer for salvation Jesus began to heal the sick. Here are a few of the testimonies we heard:

– A man deaf in one ear for over 20 years received perfect hearing
– A man blind in one eye for 3 years said that he suddenly could see after the prayer
– A woman said that a tumor which she had for more than 10 years, fell off during the prayer
– Also, see the attached picture of a young man healed of asthma

Tomorrow, the Fire Conference begins first thing in the morning. Rev. Peter Vandenberg and I will minister to the local pastors and church leaders.

In creation, God declared, “Let there be light” and the infinite void was illuminated. Today God has put his creative and powerful word into our mouths and as we declare the Gospel, light is shed abroad in even the darkest of hearts. Life and death are in the power of the tongue. We are here in Sapele as His mouthpiece to speak life to this land and to shatter the darkness with the supreme radiance of the Gospel. “Sapele…let there be light In Jesus name!” 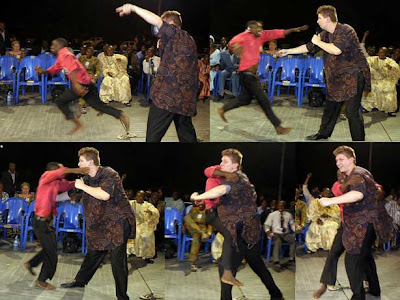