Any day now I should be receiving the official “decision card” count from our team in Nigeria letting us know how many people gave their lives to Jesus last week in UGEP.  In the meantime I have been hearing wonderful reports and the testimonies are continuing to come in of what the Lord did there.  Here are just a few that I received on this blog followed by some interesting pictures from UGEP:

“We are grateful to God for the blessings we received through that Crusade: the blind saw, the crippled walked, cancers and many diseases were healed by Jesus and many denounced cultism and idolatory as idols were publicly burnt with fire. To God be glory, many testimonies abound in our churches.” ~ Rev. ThankGod Ogujiuba

“Finally the land of Ugep has been set free from all the captivity of the devil, The land is made hold and set fee to go…! praise be to the name of God. Jesus is Lord.” ~ Ubtex

“I was in ugep right from the first day and it was my first time to be under Evang Daniel Kolenda’s ministration…it was thrilling and cant but praise God for such a wonderful thing…the whole atmosphere was charged with miracles!” ~ Anonymous

I was also at the fire conference on thursday morning and cant just forget the illustrations from judges and the almost drowning in the river which evag kolenda used…also Peter Vandenburg was creative and captivating while preaching tht he left me spellbound with the rich and wonderful illustrations… I know Ugep wont remain the same after this crusade because i was there and am no longer the same.” ~ olusola oludapo adeyemi That's one way to get your face on the poster Derek needs a few more gadgets in his life One of the volunteer workers saw the black cable (snake) coming out of the ground and thought it was a real snake. He proceeded to chop it in half with his machette which created a lot of extra work for Rob who had to splice each individual wire into a connector whereby the two halves could be re-joined Reinhard Bonnke is welcomed by the king of Ugep One soul saved among thousands 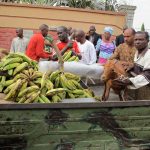