I am in transit now to Miyazaki, Japan for the J+Passion Conference where I will be ministering for several days. I had a layover in South Korea today so I visited Yoido Full Gospel Church in downtown Seoul. It is Tuesday here so there were no services going on, but it was still very interesting to walk around the campus and get a feel for what God is doing here. 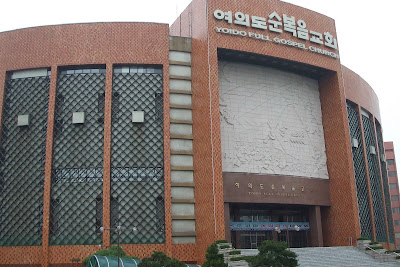 Yoido is the largest church in the world with over 800,000 members. The sanctuary only seats 12,000 at one time so there are nine consecutive services each Sunday morning translated into 16 languages. 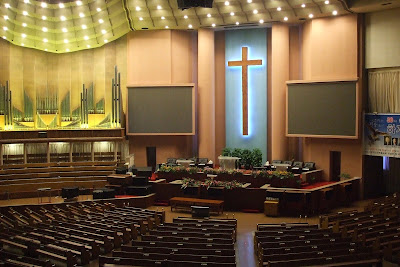 I was hoping to make it to the prayer mountain, but I will not have enough time today.

I am always fascinated at how Christianity easily flourishes in every culture. Most religions are dominant among one ethnic group, one geographical area or one culture. Christianity, on the other hand, flourishes everywhere. In Africa, in Asia, in North America, in South America, in Latin America, in China…everywhere, God is on the move. Who would have guessed a hundred years ago that the world’s largest church would be in Korea?

Had I not been coming to Japan, I would be In Indonesia with Reinhard Bonnke, where he just finished a crusade there after the World Pentecostal Conference. I saw an email that he sent out reporting on the thousands that had packed Bethany Church in Surabaya/Indonesia…the largest Muslim country on earth. I couldn’t believe my eyes when I saw the picture.

The Church of Jesus Christ is unstoppable! It cannot be quenched by communism or false religion or materialism or violence. It isn’t hampered by any culture or hindered by any economy. Romans 1 talks about how creation points to God. In the same way, the Church points to Jesus. I know that the Bride of Christ has it’s issues, but I think that all in all, she is so beautiful and the ultimate evidence of a genious, generous Jesus. Be encouraged today…we are on the winning side. We serve the true and living God and HE is building HIS Church all over the world and the gates of Hell will not prevail against it…Hallelujah!

Please keep me in your prayers this week as I minister in Japan…a nation that desperately needs a touch of God and a move of the Holy Spirit. Pray that the youth will be set ablaze with the Fire of God and that this conference will be a catylist to spark a spiritual revolution in Japan.