This morning was the beginning of the Fire Conference here in Kampala.  Rev. Peter van den Berg and I ministered to the pastors and church workers who have come from far and wide to receive an impartation for their lives and ministries.

I believe that the Fire Conference, in many ways, may have even more long-term impact than the crusade itself because it’s multiplication effect.  Once the crusade is over, these ministers, filled with power from on high, will take up the baton and continue on to see Uganda impacted for eternity.

Tonight, after I preached the Gospel, there was an overwhelming response from those who wanted to repent of their sins and put their faith in Jesus Christ.  Thousands were born again into the Kingdom of God.  And the blood that brought salvation is the same blood that brought healing tonight;

As I was praying for the sick and rebuking sicknesses, demons began to manifest all over the place.  Many were violently thrown to the ground as the demons were leaving their bodies.  This mass deliverance that started tonight will continue tomorrow night.  I will be breaking the familiar local curses in the name of Jesus and we will burn the articles of witchcraft that are brought; charms fetishes, amulets, idols etc.

Please pray for a mighty and complete deliverance tomorrow for the people of Kampala.

Yours in the Gospel,
Evangelist Daniel Kolenda & Reinhard Bonnke
Together the whole CfaN team 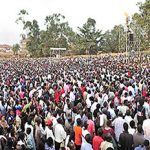 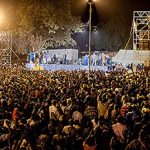