Day 3 of the Christ for all Nations Great Gospel Crusade

This is a very special year for the nation of Uganda.  They are celebrating 50 years of independence and everyone is using the word “Jubilee.”  But the greatest jubilee of all is the Good news of the Gospel; proclaiming liberty to the captives and recovery of sight to the blind and setting free those who are oppressed.  I believe this Gospel campaign is a prophetic sign to this nation and what we are seeing this week is not only a sign, but also a wonder.

After preaching the Gospel and breaking the curses tonight in the name of Jesus the power of God began to roll across that field.

A young man, totally blind in both eyes for five years received his sight tonight!

Another young man with AIDS was hit by the power of God on Wednesday. He said he felt electricity going through his body.  He was so sure he had been healed that he came forward to give his testimony.  But the ushers told him to go see his doctor and have a check-up.  Tonight he brought the diagnosis straight from the hospital – I read it with my own eyes – HIV NEGATIVE!

A crippled girl walked for the first time tonight as well as a lame woman who was carried to the meeting!

These are but a small sampling of the many wonderful things that Jesus is doing.  But the greatest miracle of all was the many thousands who surrendered their hearts to Christ tonight, making him Lord and Savior.  This is the Jubilee that Uganda needs and this is the acceptable year of the Lord’s favor!

Yours in the Gospel,
Evangelist Daniel Kolenda
Together with Reinhard Bonnke and the whole CfaN team This man was blind but now he sees! 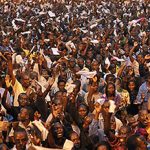 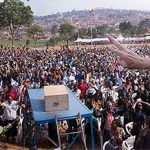