So I’ve decided that it’s time to get back in shape and my method of choice is a 90-day workout and diet plan called P90X.  One unique feature of this program is that all the workouts are on video and you follow along with a virtual room full of muscle bound athletes that seem to chuckle at you condescendingly as you struggle with your 6th chin up.

A couple of days ago, my 6-year-old son and 4-year-old daughter were joined by their mother who decided that they wanted to exercise with me and so the four of us together were warming up for a invigorating plyometric workout.  We were only about 5 minutes into the video – still somewhere in the stretches – when my son turned to me with great excitement and said, “Hey dad look…you almost got muscles…look at your elbows!”.

My wife and I had a real good laugh, but my poor son never got what was so funny.  I didn’t have the heart to break it to him that it doesn’t work that way.  It takes a long time and many doughnuts, followed by excessive periods of sedentary inactivity and lack of resolve to become as out of shape as I am.  And getting fit, loosing weight and building muscle doesn’t happen overnight either…much less after a few minutes of warming up.

The laws of sowing and reaping are universal wether learned by a little boy on an ancient Israeli farm or a little boy in the gym with is dad.  Unfortunately…these are principles that many adults still do not understand. 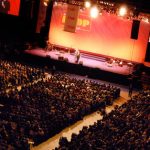 Re-Entry into the Blogosphere…with a BANG!Articles, Crusade Photos, Devotional, Teachings 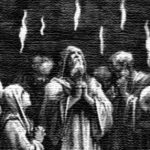