I am now back in the US and reflecting on our trip to Madurai, India. My Spirit is refreshed and eager, but my body is recovering and taking its time. It was an exciting and extremely grueling trip with our team ministering more than 24 times in only five days at schools, orphanages, the Leaders Conference and a Women’s Conference in addition to the nightly mass Evangelistic Gospel Crusades. My blogging slacked off once we were in the heat of the fray for lack of time and creative energy…all of it being poured out in ministry. I will do my best to recount the days now touching on the highlights for me personally.

SUNDAY, JULY 8 – THE CONCLUSION
My day started out early in the morning. By 9:00 am, I had preached in two packed church services. In the middle of my second service, I started getting sharp pains in my stomach. It was all I could do to make it through the message and get back to the hotel. For the rest of the day I was in bed and very ill. I finally got myself up at around 5:00 pm and started preparing for the service. I wasn’t sure If I would make it, but several of the team members came and prayed for me and felt a renewed strength. 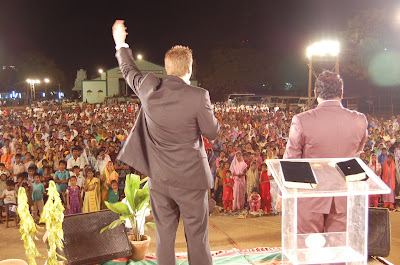 When we arrived on the crusade grounds the crowd was eager to hear the Word of God. Again, before I preached, I took testimonies of many of the people that had been healed the night before. The young lady who had been deaf in both ears testified. 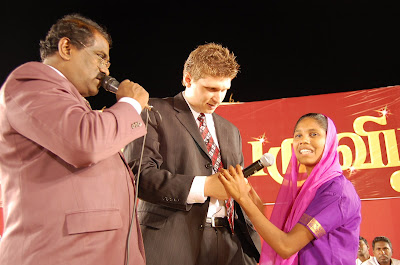 Another young lady who had been deaf in one ear because of a physical hole in her eardrum was completely healed as well…a creative miracle. Many wonderful testimonies of healing made the way for me to preach about the goodness of God. Again, the number people who responded to the invitation to receive Christ was overwhelming. At this point I was still feeling very sick so I told the team that I wouldn’t be staying to pray for the sick as I had the night before, but when I tried to leave, again the sick pressed in. Again, I sat down on the steps and prayed until the last one had received prayer. Interestingly, I prayed for several people who had severe stomach pain. Every one of them was instantly healed, yet my stomach was still in severe pain. The power of God was not hindered by my sickness. Most of the sick people were healed instantly. One lady with 5 tumerous growths in her neck was instantly healed. I wished that we had four more days to keep this momentum going and to keep experiencing Gods saving and healing power.

The conclusion of the Crusade I felt was a great success. The people who attended were mostly Hindu people who heard the Gospel preached very clearly with a demonstration of the power of God. The pastors invited me to come back again next year and we are planning another trip to this region. If anyone is interested in being a part of the team, please visit the website and sign up today.

SATURDAY, JULY 7 – THE MIRACULOUS UNLEASHED!
I have prayed corporately for healing after the last two services, but because of time constrains and logistical issues, I had postponed the testimonies until this night. Instead of having the testimonies at the end of the service like usual, I took the testimonies from the last two nights before I even preached tonight. The testimonies were powerful, but things really started happening after the service. I was on the platform, the service was still going on, and a young woman came right up onto the platform with her young friend who was deaf in both ears and requested prayer. I actually turned them away for the simple reason that I didn’t want to set a precedent of people walking up onto the platform uninvited. When I sent her away, there was a look of terrible disappointment on her face. I actually felt bad and wished I could have prayed for her. I hoped she would come back at the end because I could see in her eyes that she had faith to be healed. After I preached the Gospel, I called everyone up close to the platform to receive prayer corporately. As I was praying I noticed this same girl again. She was holding both hands over her ears, tears were streaming down her face and she was praying in a slurred, muted tone, typical of the deaf. After I prayed I was walking down from the platform to go the vehicle to take me back to my hotel, but the people would not have it. The pressed in close to the stairs and were desperate for prayer. I was tired and wanted to go home and I had yet to make a television appearance before my activities for the evening were over, but I would have had to physically push these people out of the way to get to my vehicle. “These people are the reason that I came across the world”, I thought, “ and they are the reason that Jesus came from Heaven to earth”. I sat down on the steps and prayed for them one by one…taking time to test each one. 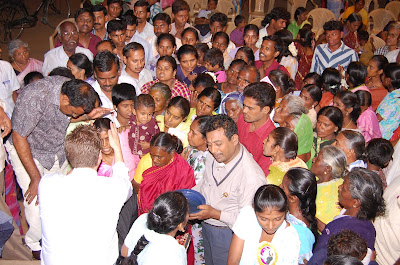 After praying for a couple of minutes, I noticed this same deaf girl several feet back and I reached out, took her hand, and pulled her forward. As soon as she got close enough, she dove onto the dusty ground, grabbed by ankles with all of her might and began to weep uncontrollably. I was so moved. I stood her on her feet and prayed for her ears. Then I shouted into one ear…but there was no response…she was as deaf as a rock. I prayed again. This time she said, I can hear something. It was a small improvement, but it was evident that something was happening. I sent her onto the platform where I had one of my team members waiting to interview people who were healed. As this young woman was explaining what had happened, her ears popped open completely…she was totally healed. Both of this girls Hindu parents had come to the meeting that night. Both received Chist…Hallelujah! There were many, many more healings. More than I have space to write about. I stayed and prayed for every last sick person that would wait for prayer. MOST of them were instantly healed. God is moving in Madurai.

After this wonderful service I went to a local television station along with John Kolenda (my uncle and a pastor in Bloomsburg, PA) and John Arul (Our crusade organizer) and James Kolenda who had come to capture the event on film. I preached another Gospel message on the airwaves and then took live calls on the air and prayed for the people. The standard for Indian television is not what I am used to. In the middle of the hour long, live broadcast, John Arul’s cell phone began to ring loudly…it think it was playing the mission impossible theme. John played it cool…pretending as if nothing out of the ordinary was happening. Just at that moment one of the Indian technicians comes crawling across the floor like a little tiger…he is coming to save the day. Off to my left there is a monitor that shows what is being viewed live on television. I watched as a hand immerged from below the visible portion of the screen and slowly…stealthily removed the phone from the table. It was all I could do to keep from busting a gut laughing. John refused to look at me because of the big, goofy smile on my face that was being fueled by James sitting on the floor straight ahead of me laughing. It was a television appearance I will not soon forget. FRIDAY, JULY 6 – THE CROWDS ARE GROWING
Today was the final day of the Leaders Conference and I preached on the Fire of God and then prayed for the Fire to fall on the pastors and leaders gathered there. The alter time was powerful. I don’t think that they are used to people being slain in the spirit and manifesting. It was comical to see two pastors practicing the catching process. One pastor was standing with his back to the other pastor, crossing his arms over his chest and then falling backward into the other pastor’s arms. I asked several people to help me catch, but none of them seemed to understand what was going on. Several girls were trying to hold up there friend who was unconscious, others would get up off the floor quickly with startled looks when they awoke and realized they were on the floor. There was something so innocent and real about it. People were genuinely being touched by the power of God…many for the very first time and it was a powerful conclusion to the Conference. Several pastors told me that they had been filled with the Fire of God and a new passion for ministry…Praise the Lord!

When we arrived at the Crusade grounds, the sight was very encouraging. The crowd had more than doubled from the night before and there was a noticeable rise in the level of anticipation in the air. I felt as if the Gospel message really landed. The majority of the people in attendance were not church people, but Hindu. The people responded to the invitation to receive Christ almost unanimously. Most of the people that I prayed for after the service still had markings painted on their head…a sign that they have been worshipping some Hindu diety, but now they were newly saved. Praying for them was something like holding a new-born baby in your arms…so precious. Some people might say, “tell them to take those markings off”, but my job is to be a catcher of men…Jesus is the cleaner. I saw one woman rubbing the paint off her forehead as she stood there. I didn’t ask her to do this. The Holy Spirit was convicting her…It is such a privilege to lead people to the Lord. There is no thrill that I can properly compare it to in this world.

THURSDAY, JULY 5 – DISAPPOINTED
Our day began early with team devotions and breakfast and then everyone went there separate ways to minister in various places. I went first to an Assembly of God Bible School. I preached in their chapel service and proceeded directly to the Leaders Conference where I preached the second of two sessions. That evening was the first night of the Crusade. If I am honest, I was very disappointed. We had prepared for crowds averaging 30,000, but several weeks before we arrived, a high-ranking government official died unexpectedly and an emergency election took place. During this time it was illegal to advertise anything else…including our crusade. As a result, instead of a month of advertising we only had a few days…less than a week! I arrived on the crusade grounds that first night anticipating close to 30,000 and instead was greeted by about 1,000 people. I was more than a little frustrated, but we all pressed on knowing that God is in control and He will advertise Himself with His own mighty hand.