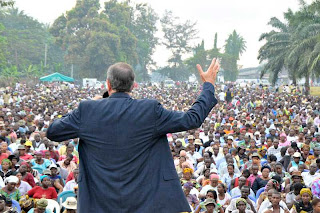 Today was the conclusion of the Sapele Fire Conference. When we arrived at the venue, early this morning, we were amazed to see that the crowd had literally doubled in size! The people had come to receive. Rev. Peter Vandenburg preached a poignant message about “Final Steps to Receiving the Power of God” and then I followed with a short teaching. When we prayed, heaven came down. Many thousands were touched. It was glorious!

Last night I told the people that were not healed in the meeting that some of them would wake up tomorrow morning to find that Jesus had healed them. One woman who had been crippled by a stroke and rheumatism for 28 years, but Jesus appeared to her in a dream at 2:00 this morning and healed her legs. She threw the crutches away and demonstrated her healing to the delight of the crowd. 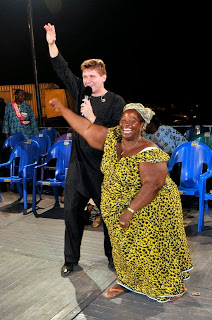 I also received a word of knowledge last night about someone who had been wounded by a gunshot and had not been able to recover from it for years. Tonight that woman gave her testimony. Shot in the leg four years ago, she had been partially crippled since. Tonight she and I danced together on the platform…she is healed!

One man shared a comical testimony. He said that he is well known in the city as an addict and alcoholic. Last night I prayed that addictions would be broken. At about that time he was trying to smoke a cigarette, but he could not get it to light. Suddenly he said he fell to the ground unconscious. Ever since he got up he has not had a desire for anything he was addicted to. He took his pack of cigarettes, threw them on the ground and began to stomp them. Praise the Lord!

We heard other wonderful testimonies as well including a woman deaf in one ear for nine years that was totally healed. One thing is sure; Jesus is alive and well in Sapele, Nigeria!

Salvation, repentance, healing, deliverance and Holy Spirit baptism – all in one night!! It is as though we are living in the Book of Acts. 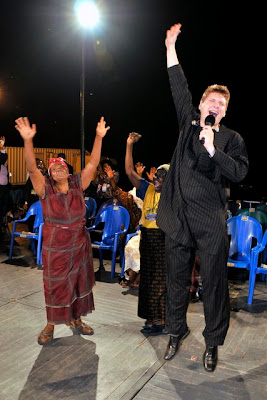