By Daniel Kolenda
Posted October 12, 2015
In #AfricaShallBeSaved, #GospelCrusade, Articles, Cameroon, Crusade, Crusade Photos, Featured
He Felt a Strong Wind, Then a Miracle in His Legs and Back2015-10-122015-10-13https://danielkolenda.com/wp-content/uploads/2020/03/jupiter-logo.pngDaniel Kolendahttps://danielkolenda.com/wp-content/uploads/2020/03/jupiter-logo.png200px200px
0 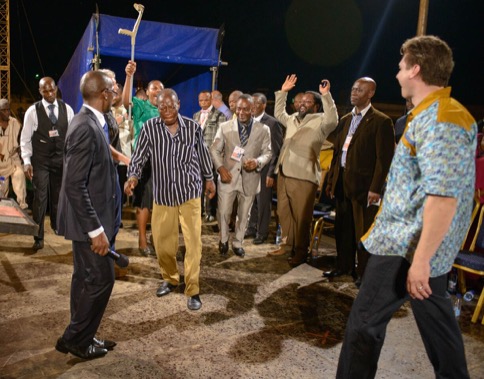 Elie Denny suffered for many years. First a herniated disc in his back prompted a surgery that failed and caused nerve damage and a cascading series of physical problems. His daily life was filled with tremendous pain and difficulty getting around. He was unable to work and became a burden to his family.

When Christ for all Nations brought their Gospel Campaign to Douala, Cameroon Elie attended. As evangelist Daniel Kolenda was praying for the sick, he said, “I remember feeling this strong wind flow through the crowd. I remember it brushing against my whole body. I felt something happen in my back and in my legs. I remember in that moment, I had so much faith…I just knew. I dropped my walking stick. I stood up straight and just walked. My family couldn’t believe it. It was one of the most amazing moments of my life!”

As Elie told us his story, he became emotional and all of us were moved by the miracle he had received from Jesus. Watch Elie tell the story in his own words.

If this is your first time here, take a moment to subscribe to my YouTube channel here. New videos are released every week!