I am sitting in my hotel room now in downtown Vienna, Austria.  It is dark and cold here and the snow is coming down outside.  It has been a very long day of travel (my flights were delayed three times), but I thought I would take a moment to write the 5th and final part of this series on discovering the will of God for your life.

I hope that this series has been helpful to you and while I have so many more thoughts on this subject, I want to conclude by encouraging you to begin to answer the call of God on your life today.  Begin to take that first step.

You can study music theory your entire life, but you will never learn the play the piano until you sit down and start doing it.  It will be difficult at first.  Your fingers wont know what to do.  You will feel frustrated and even discouraged at times.  Sometimes you will feel uncoordinated; like you have all thumbs.  Sometimes you will feel like a failure.  And it is the fear of these feelings that keeps most people from following God’s call.

I cant say that everything I have done in ministry has been wonderfully successful.  In fact, I could point to many initiatives that turned out to be dismal failures.  But even in the negative experiences, I learned valuable lessons that I draw from today.  Thomas Edison spent years and thousands of failed attempts to invent the lightbulb.  He said, “If I find 10,000 ways something won’t work, I haven’t failed. I am not discouraged, because every wrong attempt discarded is another step forward”.  He refused to fear failure.

In Matthew 25 we read the story of a master who distributes money to his servants before leaving on a long journey.  To one servant he gives five talents, to one two talents and to the last servant one talent.  I’m sure you know the story; the first servant invests his five talents and soon has ten.  The second servant invests the two talents and soon has four.  But the third servant hides his talent in the ground.  What is fascinating is the explanation that this unprofitable servant gives to his master upon his return.  He says, “I was afraid, and went and hid thy talent in the earth” (Mat 25:25).

He buried his talent because of FEAR!

What was he afraid of?  Fear of failure?  Fear of being mocked?  Fear of hard work?  I’m not sure.  One thing is clear; whatever he feared, he feared it more than he feared his master.

When God created Adam, He created him “from the dust of the earth”.  We are vessels of earth.  And it is in this “earth” that so many bury their talents…because of fear.

My friends one day we are all going to stand before the master and give an account of what he has entrusted to us.  Oh that we would fear that day above all and be willing to risk everything so that when it comes, we would not be ashamed.

What if that servant had invested his one talent and then the stock market crashed and he had lost it all?  I think the master would have had much more patience with him.  At least he would have done something.  You’ll always loose 100% of the battles you never fight.  Today there are so many people sitting around doing nothing because they are not exactly sure what to do.  My friend…what are you afraid of?  What do you have to loose?  Doing nothing is even worse then failure.

Here’s a recap of the previous points 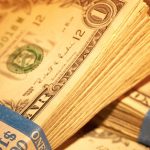