Over the past two days I have been addressing the question of how to discern God’s will for your life.  I have found that most people seeking God’s will fit into one of two categories.  I have dealt with the first category already; those who have absolutely no direction.  Today I would like to deal with the second category; those who have a sense of what God has called them to do, but don’t know how to get from where they are now to where they know they are supposed to be.

One young man told me, “I have a desire to start a prayer ministry that will go on 24-hours per day, seven days per week, 365 days per year”.  He was full of dreams, but hadn’t the slightest clue how to get there.  My advice to him was simple: start with one night per week.  If that was too much, do one night per month.  The key is to do what you can do…begin to move in the direction of your calling.

Another young man approached me after a service with tears in his eyes.  “I am called to be an evangelist like you” he told me.  He said, “I am going to preach to multitudes and win millions to Christ”.  But he went on to explain that no pastor would invite him to come and preach…he had no platform for his ministry.  My advice to him was to start by winning his family members to Christ and then his co-workers and friends.  Then go out onto the streets and start preaching to anyone who will listen but don’t just sit around waiting for an invitation…it will never come.  Get up and DO SOMETHING!  Begin to move in the direction of your calling.

There is a Chinese proverb that says, “The journey of a thousand miles begins with a single step”.

In Joshua chapter 3 we read that the Children of Israel’s nomadic caravan had come to a seeming unsurpassable obstacle; the Jordan River had flooded it’s banks and blocked their path. If Joshua had been trained in some of our fine Bible colleges, I’m sure he would have counseled the Israelites with wise words like, “We are going to wait right here until the Lord makes a path in the waters”.  Or in modern vernacular: “We are going to wait until the Lord opens a door”.  But his command was quite to the contrary.  He told the priests to take the ark and to go forward into the water.  And as soon as the feet of the priests touched the brim of the water, the Jordan parted.

(15) And as they that bare the ark were come unto Jordan, and the feet of the priests that bare the ark were dipped in the brim of the water, (for Jordan overfloweth all his banks all the time of harvest,)  16 That the waters which came down from above stood and rose up upon an heap very far from the city Adam, that is beside Zaretan: and those that came down toward the sea of the plain, even the salt sea, failed, and were cut off: and the people passed over right against Jericho.  17 And the priests that bare the ark of the covenant of the LORD stood firm on dry ground in the midst of Jordan, and all the Israelites passed over on dry ground, until all the people were passed clean over Jordan.

If Joshua had instructed the Children of Israel to wait for God to part the water, their skeletons would still be bleaching on the banks of the Jordan, because the water doesn’t part until your feet get wet.

No one in their right mind would sit parked in front of a green light waiting until all the lights all the way down the street turned green as well before they begin to drive.  Yet so many people are sitting in park because all of the doors haven’t opened up for them and they can’t see exactly how things will work out.  But the most important step is just the one that is right in front of you.  Do what you CAN do and as you are faithful with it, God will give you more. 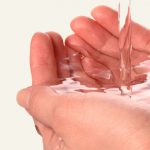