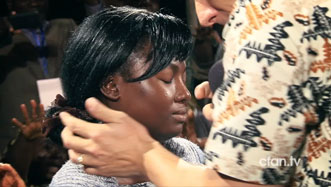 The moving video below tells the story of Titi Bongo who was deaf in both ears for 17 years. She was rejected by family members and failed in school. She felt like a prisoner in solitary confinement and wanted to take her own life.

In January of 2014, Christ for all Nations visited Titi Bongo’s city of Yaoundé, Cameroon. Hundreds of thousands gathered that week to experience the Gospel. On the second night, as evangelist Daniel Kolenda was praying for the sick, Titi began to feel an intense burning in her ears and realized one of her ears could hear.

She to the platform to testify together with her brother. Her brother told the evangelist that although one ear had been healed, the other was still deaf and asked for more prayer. Evangelist Kolenda prayed for the ear twice. The first time, nothing happened, but the second time, he began to say the name of Jesus in her deaf ear in French, “Jésus, Jésus, Jésus” Suddenly she could understand and began to repeat the name, each time it became more clear and more powerful. He asked if she could hear now. She was smiling from ear to ear. She could hear, she could speak and she was praising the name of Jésus!

Take a look at this powerful testimony by clicking the video below. And don’t forget to subscribe to Daniel’s YouTube channel by CLICKING HERE. New videos are released weekly! 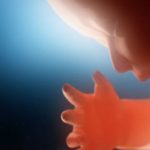