“Oh, for eloquence to plead the cause of China, for a pencil dipped in fire to paint the condition of this people…” ~ Hudson Taylor, missionary to China

History-Making
One year ago, Christ for all Nation’s Hong Kong Fire Conference made history as the largest gathering of Chinese Christian leaders ever – 5,000 assembling from all regions of China. Remarkably, this year’s conference surpassed that record as 8,500 Christians traveled from mainland China to be part of the Fire Conference.

Hungry for the Word of God and the Fire of the Holy Spirit, the Chinese Christians were not disappointed, as the Lord met them there. Like Jesus promised in Matthew 5:6, “Blessed are those who hunger and thirst for righteousness: for they shall be filled.” 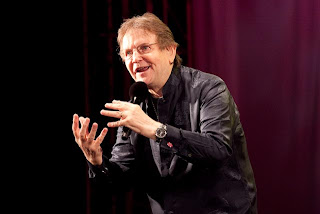 A full session of worship jumpstarted the three-day event. The Chinese praise group, Melody of My Heart, came together from around the world to minister. Expressions of exuberant praise transformed the AsiaWorld-Expo into the largest church these humble yet hungry Christians had ever experienced. Evangelists Bonnke and Kolenda continued the meetings with powerful messages, encouraging the delegates, and inspiring them to believe for the very same, if not even greater, harvests of souls in China that CfaN sees today in Africa.

Called and Equipped
Most times, Fire Conferences are about compelling Christians to do the work of evangelists – to obey the Great Commission and reach the lost. For these Chinese Christians, who toil for God under sometimes difficult circumstances, the Fire Conference had another purpose – a time of refreshing, fellowship with other believers, and impartation from the Lord. Additionally, they were equipped with the much-needed resources for evangelism and for training in evangelism.

Again this year, the Full Flame Film Series was distributed to every delegate, along with materials for replication. The delegates were intentionally selected from every one of the twenty-three regions in China, and will now return to their homes and reproduce the film sets. This strategic network of believers will disseminate these powerful inspirational film sets and spread the message and passion for winning the lost for Jesus.

Holy Communion
Not only were the Chinese from all twenty-three regions of China, but they represented each of the three major streams of churches, some of them with striking contrasts in practice and beliefs, at times leading to discord and distance between them. During the communion service, the presence of the Spirit was strong as the church being one body of Christ was emphasized. Top leaders from every branch agreed that a restorative and uniting work happened. Forgiveness flowed like a balm – towards each other and all who have hurt the church. Clearly, the church in China will move forward as more unified – in Spirit and in purpose.

Salt and Light
Each meeting of the Fire Conference was held at the AsiaWorld-Expo, which is situated in Lantau, one of the many islands of Hong Kong. Lantau is known for a time in its history when salt was illegally produced there, mostly for export to China. The CfaN Fire Conference was also about producing “salt,” and “exporting” these Chinese Christians to the entire world! They will bring with them the flavor of the Holy Spirit and the preserving presence of God.

During the concluding service of the Fire Conference, Daniel Kolenda, along with a team of ministers, laid hands on all 8,500 delegate to anoint them, bless them, and send them into the harvest fields. The fire of the Holy Spirit came and set flame to every heart, abiding in each as if a fireplace.
Saturday evening was dedicated to a Gospel crusade to reach the lost in Hong Kong. Requiring a complete change in language, a different Cantonese-speaking worship group, and radio transmitters to provide translation for the Mandarin-speaking Chinese delegates, the team worked quickly to make the switch. Reinhard Bonnke preached a clear and forceful Gospel message, and the altar was filled with new converts.

From Wheelchair Bound to Boundless Joy
Afterwards, the sick were prayed for, and there were glorious miracles. One lady, well-known to the CfaN staff, was among those touched mightily by God. At the 2008 Hong Kong Fire Conference, she had coordinated one of the dance groups that ministered during the Opening Celebration. Shortly after that event, she suffered a stroke that had left her paralyzed on one side and wheelchair bound. She came this year, not as a dance leader, but as a broken woman who had lost hope. Pressed by a friend to come, and offered to sponsor her expenses, she agreed. Desperate and clinging to faith, she took a bus all the way from Nanjing. During this year’s Fire Conference, God miraculously healed her, and she leapt up from her wheelchair. She hadn’t walked since the previous year, but now she walked onto the stage to testify and then was able to walk home.

Many others also testified to the healing miracles God worked during the Fire Conference. Days after the CfaN team had left, reports continued to circulate giving details of the amazing healings confirmed by witnesses. Pastors and church leaders were overjoyed by the outpouring of miracles like they had never seen before.

Undoubtedly, the landscape of China will be changed by the seeds planted in the good soil of the Chinese delegates. As Daniel Kolenda proclaimed: “China will be saved! We’re not asking for it…we’re declaring it in the Name of Jesus!”

Copyright © 2022 | Evangelist Daniel Kolenda
Where Am I? Oh yeah…Hong Kong!Posted from Hong Kong