What a joy it is to preach to the people here in Lome, Togo.  This is a preacher’s paradise!  The people are so hungry, so responsive and so attentive.  It is no wonder that Jesus responds to them with such wonderful miracles.

A local worship pastor told us that one year ago he was singing and suddenly his voice was gone.  For the past year he has not been able to sing or speak, but tonight, he said that as the prayer for the sick he felt what he described as “a washing” on his throat and vocal cords.  Suddenly he realized he could speak, shout and sing!  When he gave his testimony I handed the mic to him and told him to sing to the Lord.  The tears rolled down his cheeks as he worshipped with his voice for the first time in months.

A little boy who was deaf and dumb from birth was brought by his next door neighbor tonight.  After the prayer for the sick, the neighbor turned to the boy and asked, “Can you hear me?”  The little boy replied, “YES!”  I tested him on the platform and was amazed at how well he could hear and speak.

An old woman had severe knee problems that left her unable to walk.  In the attached picture you can see one of the pastors demonstrating the way she used to scoot around on the ground.  Tonight she said she felt a power surge through her body.  She stood to her feet and for the first time in many years she can now walk!  I asked her how long it had been since she was able to dance and she said it was “long ago.”  I asked the worship team to give us some dancing music and so, together with the thousands present we began to sing, “He’s a mighty God.”  The air filled with dust as thousands of feet began to dance and sing.  Somehow I’m sure that the angels were dancing with us!

More than 51 percent of Togo’s population holds to traditional animist beliefs.  Tomorrow I will be preaching about the blood of Jesus and challenging the occult deceptions that have kept many in bondage for countless generations.  Please pray that there would be a mighty demonstration of the power of God and that every curse would be broken in Jesus name. Tonight God healed her knees and she can walk again for the first time in years! This young boy was deaf and dumb but can now hear and speak through the power of God! 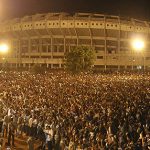 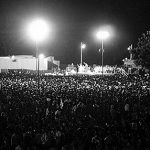