Momentum continues to build here in Ughelli, Nigeria.  The crowed double AGAIN tonight over last night and everyone is on cloud #9.

The land we are in is desperately in need of deliverance.  When we arrived in Ughelli, the local king brought me a plate with soil and a locked padlock.  He told me that the land is under a curse and asked if we would pray.  As as prophetic and a symbolic act, I unlocked the lock and then laid my hands on the soil.  We prayed over the land and declared freedom through Jesus (see attached picture)

Tonight I preached about the blood of Jesus and then together we broke every curse in His name, calling out the names of the local deities, renouncing them cutting all ties.  The barrels were filled with fetishes, charms, amulets, juju, talismans and idols.  We soaked them in gasoline and burned them in Jesus name!  I believe a mighty work of deliverance has been accomplished and the proof came quickly:

An insane man who was well known to the people of Ughelli, used to prowl around town naked and out of his mind.  When he came to the meeting he was naked as usual, but suddenly he came to his right mind.  The mechanics loaned him clothes so he could come to the platform and give his testimony.

A young man who was involved in a Satanic cult came forward and declared before the crowd that he has made a decision to follow Jesus and leave the cult forever!

A boy, deaf and dumb from birth can now hear and speak.  He will need to learn language, but it is clear that a miracle has transpired (see the attached picture)

Several cripples were also healed along with others.  Because of time, I stopped taking testimonies and tried to close the meeting, but the people began chanting, “More, more, more.”

Tomorrow is the conclusion of the Fire Conference.  We will pray for the pastors and church workers and the Holy Spirit will fall.  Now is the time to intercede! Breaking the curse over Ughelli in Jesus name! A boy, deaf and dumb from birth can now hear and speak! Dancing before the Lord 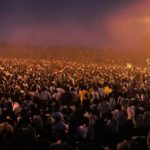 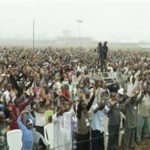