This morning the rain poured down on the Fire Conference (see the attached picture).  Rev Peter van den Berg and I preached under umbrellas and had to cut the meeting short, but the Holy Spirit was there in a powerful way.  In fact a blind woman was miraculously healed during that short, rained out meeting.

She testified tonight that the doctors had given her up saying that her blindness was a hopeless case so she sought out an alternative remedy with the local witchdoctor.  The witchdoctor told her that his “treatment” would cost 17,000 Nira, but her aunt, who was one of the Fire Conference delegates, asked her to come to the meeting this morning and receive her healing from Jesus instead.  The witchdoctor told her that she would not be healed at the crusade and said, “You will come back to me very soon.”  But he was so wrong!  Jesus opened her eyes – free of charge – in the middle of a rain storm!

Tonight a young man brought the report that he received from the doctor earlier today – he was HIV positive, but after receiving prayer he is now HIV negative!  (see the attached picture)

Another man was brought directly from the hospital tonight where he was on a IV drip, bedridden, unable to speak and partially paralyzed.  Tonight the power of God hit him in a dramatic way.  He got off his mat and began to dance and sing.  Every symptom of his sickness completely and instantly vanished!

Another remarkable testimony came from the chairman of the campaign.  He told us that, some time ago, a large sum of money was stolen from him.  He did not know that the thief was his own house maid.  She attended the meeting last night, gave her heart to Jesus and she was so convicted of her theft that she wept as she walked all the way home afterwards.  Today she brought the money to the chairman, confessed her crime and asked for forgiveness!

Paul told the Corinthians, “My speech and my preaching was not with enticing words of man’s wisdom, but in demonstration of the Spirit and of power” (1 Cor. 2:4).  What we are witnessing here in Zaki-Biam is truly the demonstration of the power of the Gospel in action.  Stories like these are being repeated thousands of times over and impacting this region for eternity.

Tomorrow the Fire Conference comes to a climax.  Please pray that the Lord would give us good weather and that pour out His Spirit on these pastors and church workers in an extraordinary way. 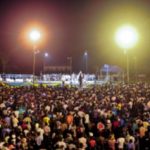 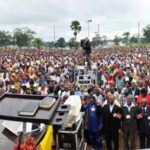