I’ve just finished preaching the final service of our campaign here in the bullfight stadium in Madrid, Spain. As I was going up to preach I started to feel drops of rain. I was not sure if I would be able to make it to the altar call, but as I got into the message the rain stopped…PTL!

The message went out strong and clear to the thousands gathered in the stadium as well as unknown thousands more that watched live via TBN throughout Europe. The response was again overwhelming. As the people were streaming forward by the hundreds, one young local evangelist said, “I have never seen anything like this in my life.” 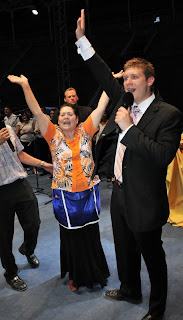 We heard a testimony of a man who was on his way to commit suicide when he saw one of the posters for the meeting. He came to the service last night and was dramatically born again.

One lady said that she had never been in a service like this before, but last night she had a dream in which she clearly saw me and the stadium. Tonight she received her healing along with many others including many deaf ears that were opened.

One young boy said that he was deaf in his left ear. He came forward when I gave the altar call and after he had received Christ suddenly his ear popped open…he was healed. I would say he received a double miracle tonight.

Another young boy was brought up by his cousin. Both of his feet were twisted and pointing inward. During the prayer he told his cousin that something was happening to him. She looked at his feet and realized that they had straightened out. He demonstrated his healing on the platform, and she said she had never seen him walk like that before. What a dramatic conclusion.

Tomorrow I will preach in Spain’s largest church before heading home. I look forward to returning one day for another mighty harvest. Spain shall be saved! 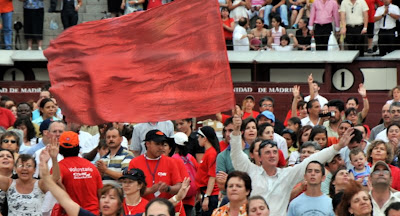 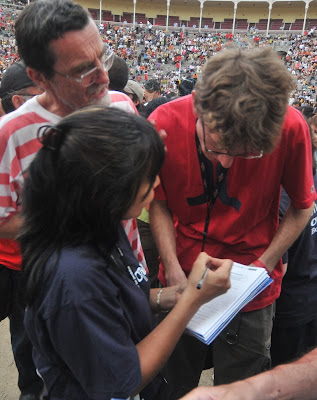