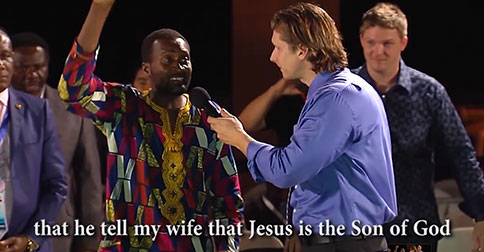 This raw video (below) filmed at one of our Christ for all Nations Gospel Campaign in November of 2013 has since gone viral on several websites. A man who had been deaf for almost two years had just arrived in town from another city by train and had unwittingly ventured into the city center (Independence square – where our campaign is being held). He was a Muslim. He had no intention of coming to a Gospel meeting and he could not understand anything that was going on anyway, so he lied down and went to sleep. But when he woke up, to his utter amazement, he could hear! He came to the platform and stood before me trembling, overcome with emotion. He had a look of shock on his face. “My name is Mohammed,” he said, and he proceeded to tell me his story.

By the end of our conversation, he seemed to be settled and completely sure, but he desperately wanted to get the message to his wife. Seeing the television cameras and assuming it was being broadcast on live television, he announced the name of the city where he lives and said “If anybody knows me…tell my wife, Jesus is the Son of God!” I wish you could have seen the crowd. No football team has ever received such enthusiasm – they were jumping and dancing and shouting with joy unspeakable and full of glory.  It is a moment I will never forget.

His name and city have been silenced for his protection. Just one further reminder that for much of the world, a decision to confess Christ publicly requires courage and risk. 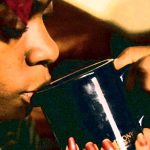 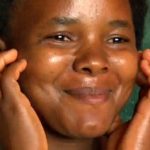