As we pulled up to the stadium we could see that it was filled to capacity and hundreds of people were standing outside wishing to get in. The venue, reminiscent of a baseball stadium, could potentially seat 50,000 people if all the grass on the sports field was used for seating. Unfortunately, the city authorities restricted us from using the field to seat people, so the bleachers, which could accommodate 25,000 people standing were completely filled. 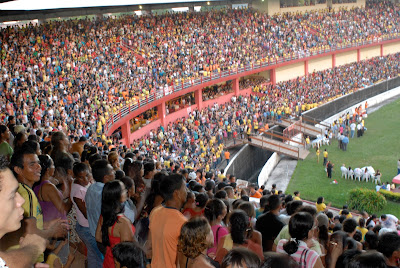 The platform, which was set up in the best position for everyone to see, had about 200 yards between it and the nearest person. I would say a line, wait for the interpreter to interpret, then wait for the sound to reach the people then wait to hear their response. Because of the distance, I could not see the expression on one single face. It was a first time experience. A short panoramic of the crusade venue

The distance barrier however did not hinder the people. They received the Gospel with great joy, and as the altar call was given, they began to pour onto the field making the long journey to the platform to accept Christ. Those that came forward knelt in the grass and repented of their sins putting their faith in Christ and were born again. 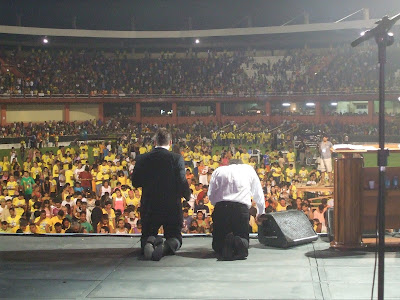 One very special treat was to have the worship led by my friend Antonio Cirilo. When he began to play I could feel a strong tangible presence of the Holy Spirit flood the field. Testimonies came in that people were healed during the worship. I have posted a clip of his worship (not related to the crusade). You will be blessed. Even though it is in Portuguese, the anointing transcends every language barrier.

Sunday I preached twice in a wonderful, thriving local church there in Santarem. Afterwards we went to an authentic Brazilian Churrascaria, and then, one of the pastors took me on a boat tour of the Amazon River. This area of the River is flooded for six months out of the year. During this time, the water rises more than 16 feet, and most homes, elevated by stilts are surrounded by water. The people, who cannot plant or harvest crops, simply have nothing to do. They canoe from place to place and wait for the water to reside. The pastor told me about their ambitious church planting initiative that has resulted in dozens of churches along the Amazon. We visited one such church to which most of the little village’s inhabitants were members. Though it had no walls or chairs, it stands as a symbol of the faith of a village that has been won for Christ. 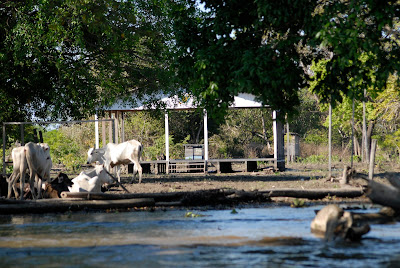