Tonight, as always, the emphasis was on the simple Gospel.  But part and parcel of the Gospel package is the infilling of the Holy Spirit.  After many thousands had responded to the call for salvation, I prayed for them to receive the baptism into the Holy Spirit (as we had done earlier that morning in the Fire Conference).  The Holy Spirit fell in mighty power and the place was shaken.

As I started to pray for the sick it seemed like suddenly a dam was unblocked and supernatural power began to rip through the crowd.  From where I was standing on the platform I had a front row seat to the amazing spectacle.  In one place demons were manifesting.  In another place the crowd had erupted in praise as crutches were lifted into the air.  Healings, miracles and manifestations began to break out on a large scale right across the field.

–        Two young men, deaf and dumb from birth repeated after me, “One, two, three…” with amazing clarity.  The uncle of one of the boys told me he had NEVER heard his nephew say anything his entire life until tonight!

–        A woman who was demon possessed and crippled for the past 18 years was delivered tonight.  She is not only in her right mind, but she can also walk!

–        An elderly man told us that he is a former witch doctor.  When the CfaN campaign came to Okene he was born again and healed from a terrible stomach disease.  But when he surrendered his witchcraft fetishes to be burned, some of his colleagues became angry and put a curse on him that left him crippled.  Since that time he has been using a walking stick, but tonight, during the prayer all the pain left his leg and he discovered that he can now walk without the stick.

We heard many other wonderful testimonies as well and we are rejoicing because we sense a real breakthrough has taken place in the spiritual world tonight.  Praise the Lord!

Tomorrow night we have one more opportunity to see thousands of precious souls born again into the family of God.  Evangelist Bonnke will also be pronouncing blessings on the land tomorrow and we believe it will be the beginning of a new day for Lokoja.

Please keep praying for us… This young man was born deaf and dumb but can now hear and talk! 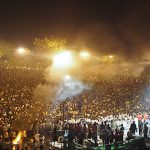 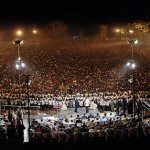