The national stadium was filled tonight with 60,000 people hungry for the Word of God.  I preached the Gospel, prayed for the sick and Jesus did the rest:

A woman who had been terribly sick for two years was taken to the hospital where they diagnosed her several life threatening illnesses including malaria, typhoid fever, tuberculosis and HIV Aids.  The doctors said that there was no hope for her and they sent her home to die.  She came to the meeting tonight on deaths doorstep knowing that this was her last hope.  During the prayer for the sick the power of God came upon her, strength returned to her body and all her symptoms vanished.  She came to the platform with tears streaming down her cheeks as the thanked Jesus over and over and then she collapsed on the ground sobbing, “Thank you Jesus, Thank you Jesus.”  It was the purest worship I’ve ever heard.

We heard that one lady came to the meeting tonight on crutches, but the moment she limped onto the field a miracle happened.  She dropped her crutches and walked totally healed.

For all the testimonies and all the miracles, all the glory goes to Jesus.  The tide is rising here in Sierra Leone and there is much more to come. 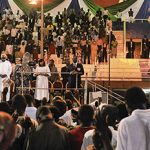 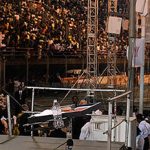