Takum is being shaken by the Gospel this week.  Tonight many people brought their juju, idols and witchcraft fetishes to be burned, including a group of Fulani Muslim people that greeted me when I came down from the platform.  After they received Jesus as their Savior tonight, they immediately pulled off the old charms that they were wearing and threw them into the barrels for burning.  Their faces, covered in tribal markings and tattoos, were beaming with the love of Jesus. We heard some wonderful testimonies of healing, including one from a mother who pulled her daughter out of the local hospital and brought her to the meeting tonight.  The girl was suffering with an extreme case of typhoid fever and the doctors were trying to treat her with no success. But the mother felt that if she could only bring the girl to the crusade she would be healed. Indeed she received a total and complete healing tonight!

Another fascinating story came from a woman who had been paralyzed for the past two years. In the middle of the night (last night), she was sleeping on the crusade ground, when suddenly she felt the Holy Spirit come over her like a breeze.  She jumped up and suddenly realized that she was totally well (see phote on left).

This morning was also the start of the Fire Conference here and it was very well attended.  It is clear that the people have come to receive (see the attached picture).

Thank you for your continued love and prayers. 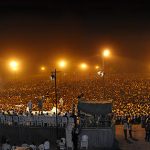 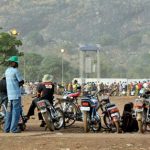