This morning the Fire Conference came to a climax with a glorious outpouring of the Holy Spirit. 25,000 delegates attended and were not disappointed. The fire of God truly fell. It is for today! Some people sigh and wish they were back in the days of the early Church, but it was neither the days nor the men which made the time special. It was the baptism in the Holy Spirit. Without it, the disciples would probably have gone back to being fishermen in Galilee and grown old telling tales of strange events when they were young. Instead, they changed the world. Tonight we had the proof that this baptism is also for today and that our generation will be saved as well. 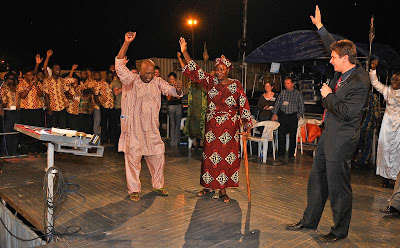 The crowd grew to 175,000 tonight, but what God did was most wonderful. Daniel Kolenda preached the Word of God and gave a massive altar call. Then the prayer for the sick followed and so many lame people were healed. One after another they threw their crutches away and walked. The crowd spontaneously burst into praise when another crutch would go up in the air. It is clear that Jesus is the same yesterday today and forever.

Yours forever in Him,

With the whole CfaN Crusade-Team.
*Click Here: To link to this article on the CfaN webpage*