Ten years ago Kafanchan, Nigeria was ground zero to a bloody rampage of Islamic extremism against the local Christians that left hundreds of churches burned to the ground. These acts of aggression were world news at the time and the one event for which the region was known…until recently. This August, Christ for all Nations held a Gospel Crusade in this very city. Aware of the volatility of the region and unsure of what awaited us there, we went, knowing that the heart of God is to seek and to save those that are lost. As we approached the city, still miles away, crowds were lining the streets and burst into joy at the sight of our caravan approaching. Finally, Evangelist Bonnke poked his head out of the sun roof of his SUV and the people were ecstatic. It was evident from that very moment that we had landed on some extremely rich soil and a mighty harvest would surely follow.

This Crusade fell into the Nigerian rainy season where daily downpours are the norm. The CfaN team calls this the “Out-of-season” crusade because of the inevitably unfavorable weather conditions. Our crusade organizer, who was in Kafanchan for 2 weeks prior to the event, told us that every day they were receiving heavy rains from morning until night. He said it was “heart-breaking.” We were praying that the Lord would hold back the rains enough to allow the Gospel to be declared and a harvest of souls to come in. Our prayers were answered in a most spectacular fashion. On several occasions it rained for a couple hours prior to the meeting. But when the preaching started, the rain stopped. And as soon as the altar call was over, the rain started once again. It happened too often to be coincidental, and although there were a couple of occasions during the five days of meetings when it did rain during the service, it was mild enough that it never hindered the preaching of the Gospel.

I preached two of the five evening messages that were each accompanied by a wave of salvations and incredible healing testimonies. One night after I had finished praying for the sick, I was already taking testimonies on the platform when I sensed the voice of the Holy Spirit prompting me to pray for those with HIV AIDS. I took a break from the testimonies and prayed once again for those with this terrible disease that has ravaged the African Continent. As I was praying, one young man with AIDS was suddenly hit by the power of God and fell to the ground. That night he had a dream. In his dream, Jesus came to him and told him that he was healed. The next day, inspired by the dream, he went to his doctor and requested another blood test. The following evening I interviewed him on the platform as he held his doctors report in the air. There on the report were the words so clearly written. HIV NEGATIVE!!! Praise the Lord. 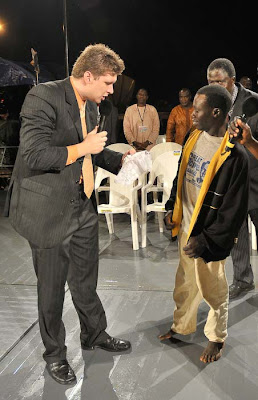 One woman testified that she had been unable to bear children, but three years ago she attended a CfaN crusade in Jos/Plateau state. Evangelist Reinhard Bonnke prayed at that meeting for women with barren wombs. She received it by faith and 9 months later her beautiful baby “Mercy” was born. 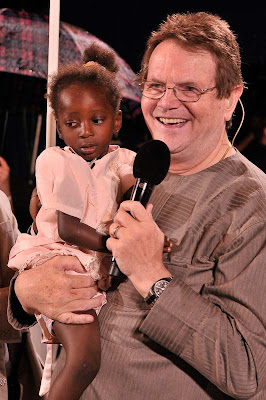 A deaf mute, handicapped from birth suddenly heard and spoke. A 7 year-old girl blind from birth was suddenly able to see. We saw her wince as the bright lights on the platform hit her newly healed eyes. Many more testimonies were given…too many to mention. And each night as we left the field there was a huge line of people still waiting to testify of all that Jesus had done. 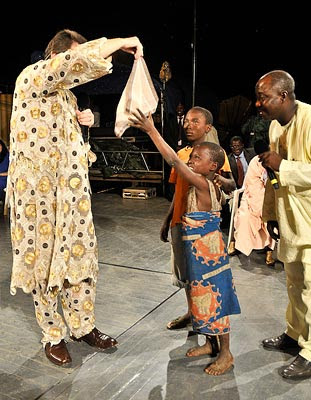 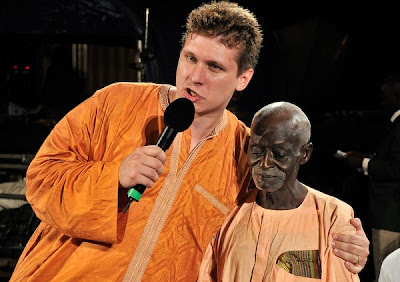 In spite of the reputation Kafanchan has for violence, we were protected by the mighty hand of God and felt very much at peace the entire time. In the end there were exactly 738,615 decision cards collected from people who had responded to the call of God and received Jesus Christ as their Savior…not bad for a week’s work – In the rainy season. Thank you for your prayers which really do make a difference all over the world.