I wish that each of you could be here with us, seeing, hearing and feeling what we are experiencing.  We are living history in the making and we are very aware that something special is happening here in Addis Ababa.  Our team here has been praying for you, that the Lord would allow you to have a sense of this great Holy Spirit work that we are all involved in together.

This morning, the Fire Conference began with a bang as Evangelist Bonnke preached the opening message. Rev. Peter van den Berg followed and ministered under a powerful anointing.  The pastors and church workers are on cloud #9.

This afternoon, my dear friend Michael Koulianos arrived at the Festival grounds early and began to teach on faith and healing.  The atmosphere of expectancy was palpable.  I followed with a message about repentance, restitution and obedience.  It was a heavy message, but thousands responded to the altar call and made a decision to follow Jesus – no matter what the consequence.

After the prayer for the sick we heard amazing testimonies.  One woman told us that her husband, who is living in the United States, has been suffering from a growth on his leg.  He was scheduled to have a surgery, but last night, during the prayer for the sick, she stood in proxy for him.  Today, at 4:00 in the afternoon, she received a call from him and he told her that the growth had disappeared!  With Jesus there is no limitation of time or space.

A lame woman was carried to the meeting by two people and laid on a mat.  Tonight Jesus touched her and she walked for the first time in two years!

Another woman told us that when she contracted tuberculosis it was very frightening because five of her family members had died from this same disease.  But last night, during the prayer for the sick she felt electricity surge through her body and suddenly all pain left.  She says she is now totally healed!  What a mighty God we serve.

Thank you for continuing to pray for us.  More to come tomorrow!

Yours in the Harvest,
Evangelists Daniel Kolenda & Reinhard Bonnke
Together with the whole CfaN team This women was carried by two men to tonights meeting, but she will be walking home tonight! Child healed of a fever 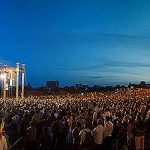 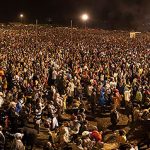