Another Christ for all Nations Great Gospel Campaign - Day 2

We are floating on cloud #9 after tonight’s meeting here in Agbani Nigeria where many thousands of people came into the arms of Jesus.  I am sure that all of heaven is rejoicing with us and only eternity will tell the incalculable impact that will be made because of what Jesus has done here.

After the prayer for salvation thundered over the countryside, miracles began to manifest.

A woman had been suffering from a terrible skin disease for the past two years as open sores from head to toe constantly festered and discharged puss.  It was a painful, embarrassing and disfiguring disease.  But last night Jesus touched her and the sores completely dried up.  As she testified tonight, I could see the scars of where the sores were, but they were now closed and healed.  Praise the Lord.

We heard three testimonies tonight of women who had lumps in their breasts that instantly vanished. One woman had been told that she needed a very expensive surgery.  But now she has been healed – for free!  Another woman said that she had lumps like footballs in her breast since 1992 but they disappeared after the prayer.

We also heard other testimonies of crippled legs and deaf ears that were healed tonight.  To God be all the glory for the great things He has done! 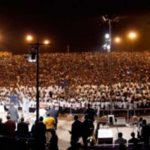 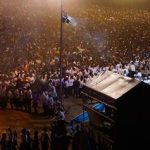