The first word of the Great Commission is, “GO…”When Jesus used fishing as a metaphor for Evangelism, he revealed to us something about his chosen model and paradigm. What does evangelism mean to Jesus?  To be a “fisher of men” implies releasing the moorings from the bollard, pulling back the anchor, pushing away from the shore and launching out into the deep.  “The Son of Man”, He said of Himself, “Has COME to SEEK…”  Now, to us He says, you “GO” and seek.
Juxtapose the Jesus way to the preferred method of most Christians today.  It is what I call “Spider web Evangelism” because as the spider loiters in her web, many Christians crouch in their churches every Sunday waiting and praying that some hapless sinner might wander in so that the pastor can pounce on them.  But the word, “GO” necessarily implies action, initiative and movement.  There is no way to “Go” while we stay!  To “GO” requires less talk and more walk, less intention and more action.  There is no shortcut, free-ride or easy way to evangelism.  Ultimately we will either “GO” to win the lost or we will supplement our sedentary fruitlessness with a myriad of programs, seminars, conferences, excuses and explanations.  In the end we may discover that working so hard to appear artificially effectual was a greater expenditure of energy than actually going would have been.
D.L. Moody once attended a convention in Indianapolis on mass evangelism.  During a break in the meeting he decided to put principle into practice.  He went out to the street corner, stood on a box and began to preach.  A crowd gathered to listen and soon they were blocking traffic.  Moody had a solution to this dilemma.  He invited all the sinners to follow him into the convention center where he would continue his preaching.  Soon the convention delegates began to return only to find their seats filled with unwelcome, unregistered street people.  Being forced to stop preaching, Moody concluded his message by saying, “Now we must close, as the brethren of the convention wish to come and discuss the topic, ‘How to reach the masses’.
When Jesus commissioned His disciples He didn’t spend much time teaching techniques and procedures for winning the lost.  Instead He summed up the heart of evangelism with a two-letter word. Jesus came from Heaven to earth to win us, now we must go to win others.  “Go into all the world and preach the Gospel”.
Recent Posts
Showing 6 comments 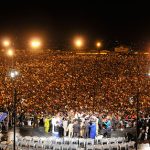 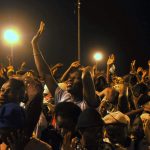