Tonight the miracles were amazing. I am still in awe of what the Lord has done. You will read a couple of the testimonies in the “official” report below:

The Fire Conference climaxed today. Peter van den Berg and Daniel Kolenda ministered – and the Holy Spirit fell as described in Acts 2. Tens of thousands of God’s people received the power that Jesus spoke about in Acts 1:8. What glorious reality!

In tonight’s service 300,000 people gathered with hungry hearts and again the Gospel was preached “with great assurance”, as Paul puts it. God majors in snatching brands from the fire of destruction. His heartbeat throbs in the gospel and sets the pulse-rate of those taking it to the lost world. This is what we feel inside. Passing years could have made us indifferent, but somehow the Lord makes us see the people as He sees them from the Cross. He said He had to do the work of the One who sent him (John 9:4). His imperative infects us! His Spirit imparts to us a little of the urgency of His all-embracing desire for the whole world to be saved. To be part of that work is our highest privilege. It brings each day to a close with a sense of the finest purpose and satisfaction available to us mortals.

Tonight the miracles and healings were flowing like a river:

– A young man testified that he was diagnosed with AIDS. Last night when the prayer was given, he received his healing by faith. Today he went to the doctor and asked to be re-tested. He brought the doctors report to the meeting tonight…HIV NEGATIVE!

– One pastor had been shot in the arm by robbers and the arm had died. He had spent a small fortune on doctors trying to save the arm, but they were unable to restore it and so he was scheduled to have it amputated. We saw him yesterday, and his arm was withered and decaying…it was a gruesome sight. Today after the prayer, he received feeling in his hand again and use of 2 of his fingers, and his hand was still improving in real time as he gave his testimony.

– A woman, crippled from an accident leaped for joy on the platform (see the attached picture), two deaf mutes were healed along with several epileptics and many other wonderful miracles.

There was to end in sight to the miracle testimonies and even as we left the crusade grounds the crowd was bursting into praise…miracles were still happening! 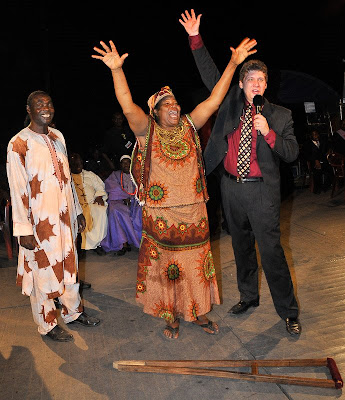 Thank you so very much for standing with us, praying and helping us to keep going for Jesus. The Lord Himself will reward you for your part in this great work in a special way.

Yours forever in Jesus,
Evangelists Reinhard Bonnke and Daniel Kolenda,
together with the whole CfaN Team.

Copyright © 2022 | Evangelist Daniel Kolenda
Beyond Belief – Day 2 in Isokoland, NigeriaUncategorized
OVER HALF A MILLION IN THE FINAL MEETINGUncategorized