What in amazing week we have had here in Monrovia, Liberia. 260,000 people attended tonight’s final meeting – that’s nearly 30% of the entire population of this capital city! The state president attended the meeting along with other top dignitaries and government officials.

Evangelist Bonnke preached the Gospel tonight and prayed for the sick. We heard wonderful testimonies – deaf ears, blind eyes and crippled legs healed to the glory of God.

Another fascinating testimony came from a self-proclaimed witch. She said she has killed 10 people in the past using spells and juju (including two of her sisters) and a couple of nights ago her coven sent her to the crusade to kill me. When she tried to place the curse on us, to her amazement she said our prayers were too powerful. Suddenly she fell to the ground and began manifesting demons. The ushers carried her out to the deliverance tent where they cast out the demon. She repented, confessed her sin and received Jesus Christ as Savior!

After the testimonies, evangelists Bonnke prayed a prayer of blessing over the people, the leaders and the nation. It was a powerful moment. What has happened this week is actually hard to quantify. But one thing is certain… Liberia has been impacted by the Gospel on an enormous scale. We are rejoicing and we thank the Lord for your partnership in the harvest.

Yours in the Gospel,
Evangelists Daniel Kolenda and Reinhard Bonnke 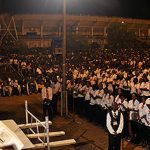 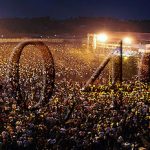