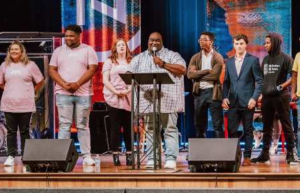 ORLANDO, Fla., June 7, 2021 /Christian Newswire/ — Lead Pastor Daniel Kolenda and the Nations Church / Christ for all Nations team are thrilled to announce that world-renowned worship leader, Eddie James, will join them as the Worship Director and Associate Pastor at Nations Church, as well as the Director of the forthcoming CfaN School of Worship.

Raised in the Church of God in Christ in Cleveland, TN, Eddie James has deep roots in Gospel music. But his extraordinary musical talents opened doors for him in other streams of Christianity, allowing him to add many diverse “sounds” to his repertoire. The result is a style that is all his own and a leadership approach that fits the Nations Church and CfaN culture hand-in-glove.

James notes, “When you look at Acts 2, and later at the Antioch Church, you see a picture of what I see the Holy Spirit doing today with CfaN and Nations Church. The nations were represented at Pentecost — Christ-followers literally poured out into the streets, sharing the Gospel of a resurrected Jesus where the people were and in the languages they spoke. It wasn’t one culture or one sound. But it was one Baptism of fire creating one Family in God. My experiences have carved room in my heart for more than one sound. When I open my mouth, there’s no question I grew up in black Pentecostal churches. But I hear the same Holy Spirit in all the styles that this church and the future Worship School are already attracting. And this house is big enough for all of them — we need all of them if we’re going to reach the lost, hurting, and broken people of Orlando and beyond. I think that’s a model not just for us as a community but for what God wants to do with His Church as a whole. Nations Church is just the tip of the spear.”

The arrival of Eddie James adds even more energy to a movement that is already experiencing tremendous momentum. Though Nations Church only officially launches on August 15, 2021, they have already seen more than 800 people come to Christ on the streets of Orlando, Florida, through their weekly outreaches. More than two hundred people are meeting weekly in small discipleship groups across the city. Attendance at the weekly “Pre-Launch” prayer services have exceeded venue capacity. 115 families are moving from other cities around the United States and even from many nations around the world representing every continent. They are on track to start with a staggering 1,500 launch team members/volunteers, and the team is now preparing multiple venues for simultaneous services around the greater Orlando area!

The announcement also comes on the heels of the CfaN Evangelism Bootcamp “Initiation Trip.” The multi-city evangelistic campaign was the culmination of three months of intensive training, just one of the many evangelistic outreach events organized by Christ for all Nations and Nations Church. The results were staggering; in more than 1,100 individual outreaches, more than 316,000 decisions for Christ were documented during the three-week campaign, along with many testimonies of miraculous physical healings, broken addictions, and spiritual deliverances.

Eddie James notes, “There’s a real alignment of vision. I started a ministry called Dream Works in the early 2000s because God kept putting young people, often drug addicts, with no place to go, in my path. At one point, I had sixteen young men sleeping on my living room floor! Over the years, many of those kids have become my touring band or our dance team. It’s a lot more than a road act — we’re a genuine family. Now, we have homes ministering to these young people in Ohio, Georgia, Alabama, Tennessee… and soon Orlando, Florida. Daniel Kolenda, CfaN and Nations Church all have that same authenticity.”

Eddie James and his ministry team will relocate from Cleveland, TN, to Orlando, Florida, in September 2021. The CfaN School of Worship is slated to launch in August of 2022. To learn more about CfaN and the Evangelism Bootcamp, visit CfaN.org. To learn more about Nations Church, visit WeAreNations.Church