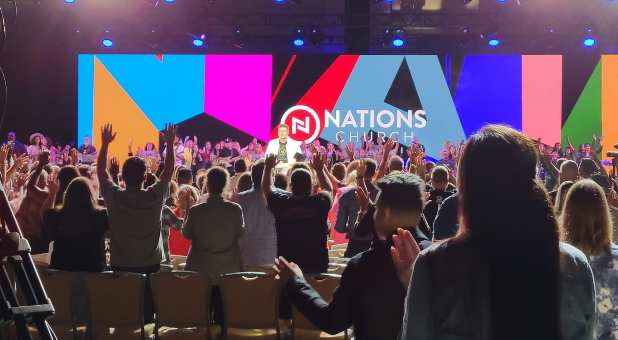 Christ for all Nations has seen more than 81 million people respond to the gospel around the world, but recently, God revealed that he wanted the ministry’s attention on an additional harvest field: Its own backyard in Orlando, Florida. The fruit of several months’ labor came together yesterday in the Orlando Ballroom at the Hilton Hotel Destination Parkway, where 2,300 people gathered and thousands more tuned in for the online stream of the official launch of Nations Church, wearenations.church.

The last weekend of January, during the Christ for all Nations Fire Conference 2021, evangelist Daniel Kolenda made the announcement of the Orlando church launch, saying it would be exciting. A team hosted interest meetings, and before long, a launch team met to pray and worship together at Olympia High School in Orlando on Sunday mornings. Kolenda intentionally held back from preaching, instead using the months of preparation to exhort the growing launch team and share the platform with many notable guest ministers.

One of the key elements in the weekly prayer and worship gatherings was sharing testimonies of people coming to Christ, from the missionaries coming back from African crusades to the one-on-one conversations happening at the grocery store or street corners.

Those prayer gatherings overflowed into home prayer meetings held during the week and spread throughout the city. As the official launch date approached, the high school auditorium hosting the Sunday prayer meetings reached capacity, forcing Nations Church to start a second prayer service.

During the lead-up to the launch, people from all over the world felt God calling them to join in with the Nations Church, and more than 120 families relocated to Orlando to be a part of this movement.

As the service began, spotlights broke through the darkened room, and shofar blasts announced that something exciting was here!

Honoring the church’s Christ for all Nations’ roots, African drummers and dancers in African dress took to the stage in celebration, and flags from around the world waved in procession as they took their places. The new congregation waved hand-held flags from the nations as the drum beats intensified, leading into Eddie James and the worship team, who burst into a powerful song describing the attributes of Jesus Christ.

Nations Church leaders Levi Lutz and Scott McNamara shared testimonies of salvations around the world as well as from the local Walmart, encouraging the congregation that the kingdom of God is advancing.

In his first official message at Nations Church, Kolenda made it clear that CfaN is not abandoning Africa—or even scaling back its efforts—to start this church movement. Instead, the ministry plans to ramp up from seven or eight crusades in Africa per year to 43.

The congregation stood as one and in unison read from Matthew 16:13-19, where Peter responds to Jesus when asked, “But who do you say that I am?” by replying, “You are the Christ, the Son of the living God”

Kolenda expounded on what Jesus meant when he said, “On this rock I will build my church, and the gates of hell will not prevail against it” (Matt. 16:18, BSB). Gates are defensive and stationary. Jesus called his church to overtake the gates of hell, and Kolenda said Nations Church will be on the front lines, attacking those gates to rescue the prisoners trapped by sin.

Many people came forward to respond to the gospel as Kolenda offered the opportunity to receive Jesus’ gift of salvation.

“As I reflect on the Nations Church launch service, I am in awe of what God has done,” Kolenda said afterward. “Thousands attended from all over the world to celebrate with us. The excitement and anticipation in the room was palpable. I’m already hearing about the way this is encouraging others to press forward, even in these uncertain times. The best part of all was the wonderful presence of Jesus in our midst. He is why we are here. This is all about Him.”

Kolenda and the roughly 1,500 Nations Church Launch Team Members are ready and excited to advance the kingdom of God and overtake the gates of hell as Jesus builds His church from the ground up. Watch the video of the launch service here.