The adventure continued yesterday as we woke up to a bleak forecast and dark skies. The rain began to pour down in buckets and a “Black Rain” warning was issued; meaning that everything would be shut down. The ensuing downpour was the worst in Hong Kong’s recorded 50 year history according to BBC which reported that 5.73 inches of rain fell in under one hour. The heavy rains overwhelmed the city’s drainage system and streets were flooded. It posed a challenge to our team and to all the conference delegates that had to travel to and from the convention center. Some cars were stuck in the water that came up the windows. 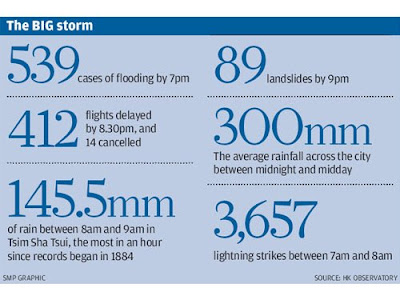 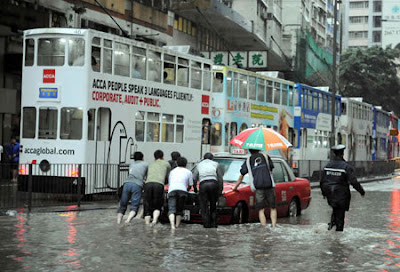 In spite of the challenges the conference went on. Not only did it go on, but Every seat was full and the convention center was packed! It was clear that these delegates were not going to be put off by any amount of rain or bad weather. Evangelist Bonnke preached a powerful message about our holy obligation to spread the Gospel and then proceeded to lay hands on every person in the building…over 5,000! It took over an hour to do, but the people were so blessed, and I believe they are now running with the torch.

The week’s events were to culminate last night (Saturday) with a mass crusade service held at the expo arena near the airport that seats 15,000. But it was obvious that the bad weather conditions got worse when we got the news that the only highway going to the convention center had been blocked by a mudslide and was impassable. If you have seen the pictures of the mudslide on the news, it is the very same one that was blocking the road to the Expo Center where our meeting was to be held. This picture was taken by one member of our team with his phone camera.

The people at the Fire Conference began to pray that the Lord would make a way as for the Children of Israel through the Red Sea. Finally at 4:00 PM, the authorities managed to clear one lane of the highway letting a backlog of traffic through that stretched for miles. Getting there was a challenge to say the least. Rather then go by road, our whole team took the subway which stops right in the convention center. By the time we got there it was still mostly empty, but 40 minutes later every seat was filled. In spite of the record breaking, torrential downpour and lethal mudslide and seemingly insurmountable odds, the crowds came to the tune of 15,000 people!

The evening resulted in salvations, healings and changed lives for many thousands of people. Your prayers were greatly needed and highly effective. We give God all the glory!

I just shared this morning in our team devotions here at the hotel, and I head off in a few minutes to preach at one of Hong Kong’s premiere churches. I am expecting another powerful move of the Holy Spirit. Tomorrow Rebekah and I head off to Beijing for a couple of days of sightseeing. I will post some of the pictures from our trip here…I’m sure they will be interesting. On Wednesday the whole team heads to Taiwan where we are looking forward to the Next Fire Conference with great anticipation.

Keep checking back. There’s a lot more to come…

Interview with Evangelist Dan Kolenda (From Voice of Revolution)Posted from Hong Kong
We use cookies to ensure that we give you the best experience on our website. If you continue to use this site we will assume that you are happy with it.Ok